Listen to three tour guides describe some famous monuments. Take notes to answer the questions below. 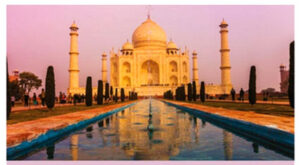 Why was it built?

What do the changing colors of the building represent? 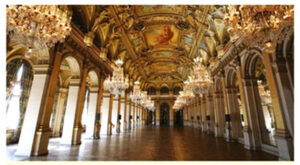 What did King Louis XIV want the Hall of Mirrors to show?

What problem did the candles cause? How did the mirrors help? 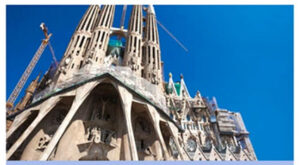 What did the architect think about man-made structures versus nature?

Why are no straight lines used?

1   Taj Mahal: built for the Emperor Shah Jahan’s wife when she died; the changing colors of the building represent the different moods of women

2   Palace of Versailles: Hall of Mirrors shows all the riches and power of France; the candles caused smoke; the mirrors reflected the light of the candles, so fewer candles were used (causing less smoke damage to the room)

1   The Taj Mahal. Why was it built? What do the changing colors of the building represent?

Woman:   What would you do for love? Would you take 17 years to build a place to remember someone?

That’s what Emperor Shah Jahan did when he built the Taj Mahal. This incredible building was designed for his wife when she died. She was his third wife, but also his favorite. The colors of the building change with the time of day, and they say that the different colors represent the different moods of women. So, ladies, you can change your mood three times a day and it’s accepted! Now, this was built almost 400 years ago, before modern construction equipment, so think about all the work that went into building this. More than 1,000 elephants were used to transport materials and around 20,000 people were hired to build the Taj Mahal. Now, if we walk closer, you’ll see . . .

2   Palace of Versailles. What did King Louis XIV want the Hall of Mirrors to show? What problem did the candles cause? How did the mirrors help?

Man:   Now we come to the Hall of Mirrors, one of the most famous rooms in the Palace of Versailles. King Louis XIV wanted this room to show all the riches and power of France: the paintings on the wall, the beautiful detail of the room, the gardens outside. They were all made more visible with the mirrors. But electricity didn’t exist in those days, so candles were used. Any idea what problems the candles caused? Anyone?

Man:   That’s right! Candles make smoke, and smoke can damage paintings. The mirrors re­flected the light of the candles, so they didn’t have to use as many. Fewer candles meant less smoke and less smoke damage to the room. Pretty smart, right? Now let’s go see some of the 350 rooms and apartments for visitors . . .

3   La Sagrada Familia. What did the architect think about man-made structures versus nature? Why are no straight lines used?

Woman:   Folks, I am so excited today to show you La Sagrada Familia! Construction on this church started in 1882, and over 130 years later, it’s still not finished! The architect, Antoni Gaudí, felt very strongly that architecture should reflect nature, and you can see this in his buildings. For example, you may notice that hill over there. La Sagrada Familia is exactly one meter shorter because Gaudí believed that no man-made structure should be taller than its natural surroundings. And notice the curves of the church. This is another example of how Gaudí copied nature. He said if straight lines don’t exist in nature, they shouldn’t exist in architecture, either.

Listen to the conversation. What other suggestion does Erik give Lisa?

Erik:   So, when is your conference in Amsterdam?

Erik:   Great. You’ll be there for the Tulip Festival. I think it’s the most beautiful spring garden in the world.

Erik:   No, actually, it’s located in Lisse, about an hour south of Amsterdam.

Erik:   You can take a bus or you go on a day tour. The tulips are gorgeous. They’re really worth seeing.

Lisa:   I’m sure they are. Thanks for the tips.

A. Listen to a news report about tourism in Costa Rica. Select the six effects of mass tourism that are mentioned. (There are two effects.) Indicate if they are positive (P) or negative (N).

B. Listen again. Write down three criteria the hotel fulfills in order to be an ecotourism business in Costa Rica.

P = English is spoken more than ever; more foreigners are investing there; tourism jobs are available all over the country

N = fish and lobster are hunted; acres of jungle are cut down; seventy-five percent of the land is unprotected

local Costa Ricans are employed; waste is recycled; energy-saving devices are used; visitors are educated about the culture and environment

Reporter:   We’re coming to you live from the ecotourism conference in San José, Costa Rica. Ecotourism is a form of responsible tourism that aims to raise awareness of and protect the local environment and culture. Alberto Rodriguez, an environmental studies professor from the local university, is here with us to explain. Good morning, Mr. Rodriguez. Can you tell us how tourism has changed Costa Rica over the last ten years?

Mr. Rodriguez:   Good morning, Emily. Well, tourism has been good for the country in many ways. English is now spoken more than ever, and many Costa Ricans are bilingual. Tourism jobs are available all over the country, and more foreigners are investing here, so it’s been good for our economy. But there have been costs to the country, too. With mass tourism, acres of jungle are cut down so high-rise hotels can be built. Fish and lobster are hunted in our waters to feed to tourists. Twenty-five percent of Costa Rican land is protected, but what about the other seventy-five percent? Ecotourism has become the answer to that question. The government reviews businesses and decides if they qualify in the ecotourism category. Then they put them on a list so travelers can choose them when they visit our beautiful country.

Reporter:   What makes a business an “ecotourism” business? What are the criteria?

Mr. Rodriguez:   Well, let’s look at this hotel where we’re having the conference. It fulfills some of the most common criteria to be a certified ecotourism business here. Local Costa Ricans are employed, waste is recycled, energy-saving devices are used, and visitors are educated about our culture and environment.

Reporter:   Fantastic. Before we go, Mr. Rodriguez, is there anything you’d like to say to all the travelers listening to you right now?

Mr. Rodriguez:   I would encourage all travelers to visit ecotourism businesses when traveling. They can learn about nature without disturbing it. Together we can make a difference!