Practice English Listening A2 Exercises – A matter of opinion

A. Listen to the first part of Lewis and Amelia’s conversation. Who likes boxing? Who doesn’t?

B. Listen to the rest of the conversation. Which of these opinions are Lewis’s (L)? Which are Amelia’s (A)?

2   Other sports are more dangerous.

3   In boxing, the goal is to hurt other people.

8   If you ban boxing, it will become more dangerous.

9   Boxers could do other sports because they’re good athletes.

LEWIS   Do we have to watch this?

L   This boxing match. Can’t we watch something else?

A   Really? I find it quite exciting.

AMELIA   Really? I find it quite exciting.

LEWIS   But it’s very violent. I mean, a lot of boxers get injured. Some even die.

A   Sorry, but more people die in football matches, you know – from heart attacks and stuff. Lots of sports can be dangerous.

L   Yes, but in football, you’re not trying to hurt someone, are you? In boxing, the idea is to hit the other guy until he can’t stand up.

A   We all know that people are aggressive. Naturally. It’s silly to say they’re not –

L   Well, not really. I think it depends on their environment.

A   Hmm … anyway, boxers don’t just hit each other, you know. They train for thousands of hours. The best boxers are great athletes – like Mohammed Ali. And anyway, nobody has to box. They have a choice. I really feel that if people want to box, we shouldn’t stop them.

L   And what about children – like under sixteen – they shouldn’t box. They’re too young. And it teaches them to be violent and –

A   No, no. It’s a sport, like any other sport, and it actually trains them to defend themselves. And it’s perfectly safe … they wear helmets and all the protective gear.

L   But what if people want to fight in the streets, or in the park?

A   Of course that’s not the same. In a proper boxing match, they have rules to protect the boxers –

A   Just a second. The thing is, they have rules and there’s a referee. The boxers wear gloves, there are doctors near the ring. If you ban boxing, people will just start boxing illegally and that’ll be a lot more dangerous.

A   Another thing is, being a boxer is a job, you know. Some people box to make money, to live.

L   But you said boxers are great athletes, right?

L   So they don’t have to box. They could do another sport … Oh, look, it’s finished.

L   Sorry. Erm … would you like some more coffee?

A. Listen and answer the questions.

1   Which picture, A or B, does each person talk about?

2   Were their ideas successful? 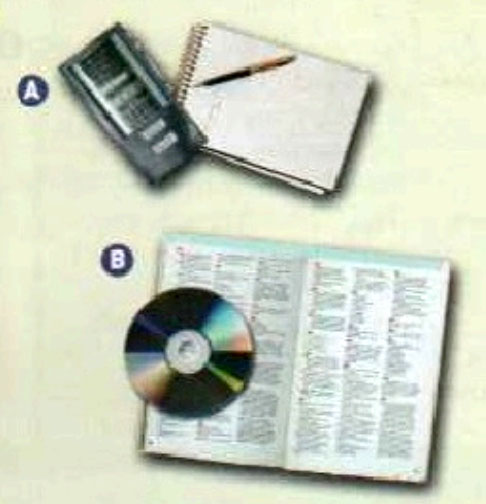 B. Listen again. Put Miguela’s and Aslan’s instructions in the correct order.

___ Then try to say everything at the same time as the recording.

___ Read the scripts and repeat each line after the recording.

___ Listen to the conversations on your coursebook CD.

___ Check your grammar, look up new words and check pronunciation.

___ Listen and write down what you said.

___ Practise again and then record yourself again.

MIGUELA   A couple of years ago, I planned a holiday to Australia and I really wanted to, er, improve my speaking before I went, so I went back through my coursebook CD and listened to all the conversations in shops and restaurants and things like that again.

M   And then I read the scripts, and I tried to speak at the same time as the recording.

A   You mean you repeated each line after the recording?

M   You can do that at first, yes. But after a while, you can actually try to speak at the same time as the person on the recording.

M   Yeah, it gets easier the more times you do it, of course. You can do it with songs too, but that’s more difficult.

A   Mm. Well, I had one teacher who told us to use Dictaphones, you know? Voice recorders?

M   Yeah, I know. And you can use your computer for that too.

A   That’s right, yeah. Well, we all had to prepare a talk about something – I think I did a talk about Istanbul, actually. So I planned and recorded it.

A   Then listened to my talk, and I wrote down what I said.

M   That’s interesting. And then …

A   Then I tried to, er, improve the text, you know, to make it better.

A   Well, I checked my grammar, I looked up some new words in a dictionary, checked some pronunciation, things like that. Then I practised my talk again, and recorded it again. I remember I recorded my talk three or four times.

A   Yeah. By the end it was brilliant. No, really, it was. It was much better. So I do this sometimes when I know I have to give a talk in English. It’s quite hard work, but it really helps.

B. Listen again. What reasons do the people give?

3   Abbas: It should move (to Sibley, but should not be in the Nature Reserve).

1   Karl: There isn’t room. They shouldn’t build it over North Park because the town needs green spaces.

2   Carole: It’s good to have the airport near the town. North Park is nothing special. The countryside is more important.

3   Abbas: The land in Sandstown is worth a lot of money. This would pay for the new airport.

LEONA   Excuse me, I’m Leona Cook from UPC news. Can you tell us, what do you think about Sandstown airport?

KARL   Well, I haven’t thought about it a lot, but I suppose it should be moved. It’s very old. I remember when it was built … thirty-five, forty years ago?

L   Forty-two years. What do you think about the idea of simply extending the airport by building another terminal? Wouldn’t that be better?

K   Well, I’m not sure about that. There isn’t room, unless they build over the North Park, and I wouldn’t want that. I don’t think there are enough green spaces in the town as it is.

LEONA   Excuse me. Can I ask you, what’s your opinion about the airport? Where do you think it should be?

CAROLE   I know some people think we should move it, but I don’t really agree. I use the airport quite a lot and it’s good to have the airport near the town. It’s true we need a bigger airport, but the location isn’t a problem.

L   But if they made the airport bigger, they’d have to build over the North Park, wouldn’t they? Surely that wouldn’t be a good thing?

C   Actually, I’m not so sure. I grew up near that park and I don’t think it’s anything special, and it’s already very noisy because of all the planes. But there’s lots of lovely countryside outside the town, and we don’t want to lose that.

LEONA   Excuse me, Leona Cook, UPC news. There’s a lot of discussion at the moment about the airport here and where it should be. Do you have any thoughts on that?

ABBAS   Well, I might be wrong, but I think they should build the airport near Sibley. But not in the Nature Reserve.

L   But Sandstown already has an airport. Wouldn’t it be cheaper just to make that airport bigger?

A   That’s a good point, but I think they could sell the land in Sandstown. I guess it’s worth a lot of money. Then they could use that money to pay for the new airport. Yeah.