A. Look at the painting by Frida Kahlo and answer the questions with a partner, giving your reasons. 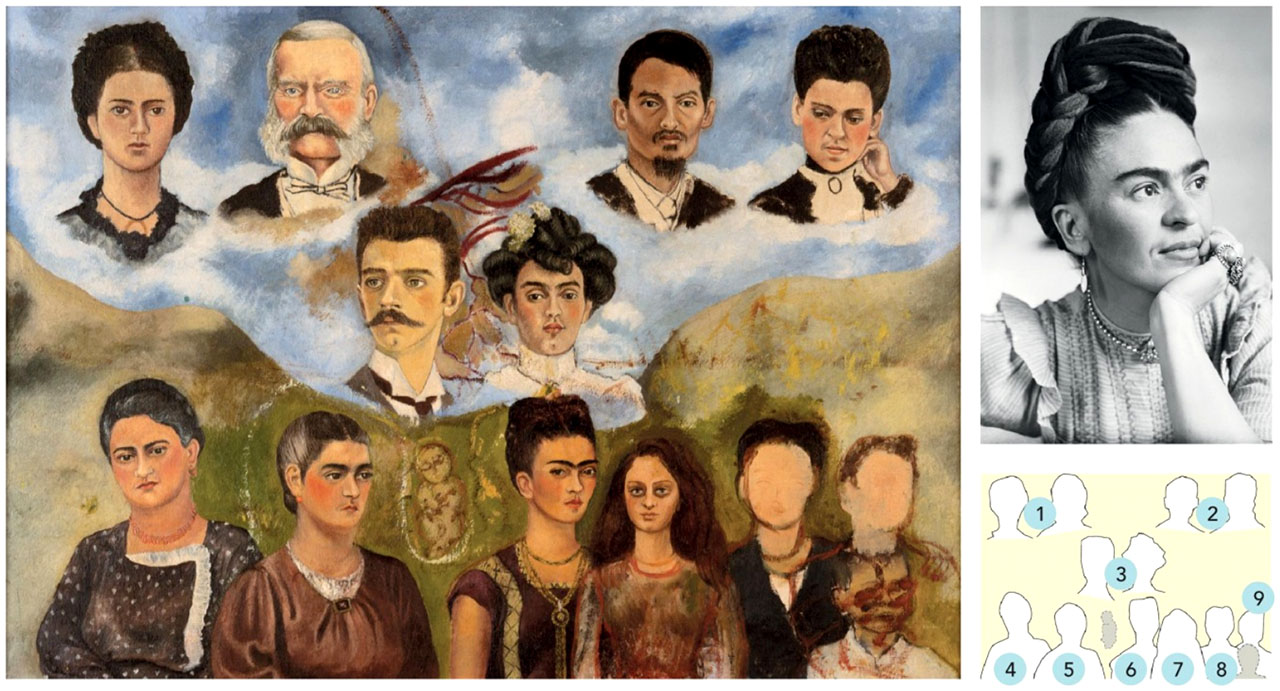 1   Do you know anything about Frida Kahlo? Which person do you think is her in the painting?

4   What do you think the unborn child in the middle represents?

5   Who do you think the three people with blank faces in the bottom right-hand corner might be?

B. Listen to an audio guide about the painting and check your answers to A. Then match the people below to numbers 1-9 in the diagram.

___ her maternal grandparents Antonio and Isabel

___ her parents Matilde and Guillermo

D. Listen to Part 2 again, about the painting. Answer the questions.

1   What is the significance of the position of the unborn child?

2   Where was her father’s family from?

3   Where was her mother’s family from?

4   What do we learn from the painting about her parent’s marriage?

5   What was Frida’s relationship like with her sister Cristina?

1   Frida Kahlo is the third woman from the left in the bottom row.

2   It is unfinished because you can see some bare canvas at the back and some of the faces are blank or have been painted over.

5   Two of the blank faces represent her sister Cristina and Cristina’s son Antonio. The last blank face is unclear.

2   her maternal grandparents Antonio and Isabel

3   her parents Matilde and Guillermo

1   The unborn child is below her father, to whom she was very close.

2   Her father’s family was from Germany and Hungary.

3   Her mother’s family was from Spain and her grandfather had American Indian origins.

5   They were very close, but Frida was jealous of Cristina.

Frida Kahlo is Latin America’s best-known 20th-century painter, and a key figure in Mexican art. She has also become a kind of cultural legend. She was born in Mexico in 1907, the third of four daughters, and when she was six, she caught polio, a disease which left her with one leg shorter than the other. Her second tragedy came when she was 18: she was riding in a bus when it collided with a tram. She suffered serious injuries, which affected her ability to have children. Although she recovered, she was in pain for much of her life and had three miscarriages. But it was this accident and the long periods of recuperation that changed Frida’s career plans: she had wanted to study medicine, but instead she started to paint. This work is an unfinished one—you can see patches of bare canvas behind the row of women at the bottom of the picture and some of the faces have been painted over, suggesting she may have wanted to repaint them. Frida started it in 1949, five years before the end of her short life—she died in 1954 at the age of 47. She actually carried on trying to finish it on her deathbed, which suggests that it had a strong meaning for her.

As with many of her other works, the image contains at least one self-portrait: she is the third woman from the left in the bottom row, but the unborn child next to her may also be a representation of her—it is placed below her father, to whom she was very close. The painting is a kind of visual family tree: at the top are both sets of grandparents. On the left are her father’s parents, whose ancestors were German–Hungarian. On the right are her maternal grandparents: her grandfather Antonio had American Indian origins, while her grandmother Isabel was the great-granddaughter of a Spanish general. Her parents Matilde and Guillermo, who were dead by the time this picture was painted, are in the middle of the picture. Their portraits are based on photographs and it is interesting that they are shown turning away from each other—their marriage was an unhappy one. They appear with their dead parents in a kind of cloud above their four daughters. From left to right the daughters are Matilde, the eldest, then Adriana, followed by Frida herself (with her niece Isolda) and then, with a blanked-out face, her sister, Cristina. Frida was very close to Cristina, but also jealous of her, especially because she had an affair with Frida’s husband, the painter Diego Rivera. The next figure is Cristina’s son Antonio, but it is not clear who the last, unfinished face in the very bottom right-hand corner might be.

A. Listen to four people comparing having brothers and sisters and being an only child. Do they mention more advantages or disadvantages of having siblings?

B. Listen again. Which speaker mentions these advantages of having brothers and sisters?

___ A learning to interact with other children

___ C not being the sole center of your parents’ expectations

Speaker 1   Speaking from my own personal situation, I love the fact that I have a brother. Um, it provided, he provided me with a lot of fun when, when we were growing up um, and um now having, having two kids myself I’m very happy that they, they’ve got each other to look after. And, uh, I think as you go through life and your own parents get older, um and you know, you will one day have to look after them, I think that with a, with a sibling would be a lot easier.

Speaker 2   I’m an only child, and someone said to me, “Oh, that must be so much better to be an only child because you get all your parents’ attention and you don’t have to share it with your brothers and sisters,” and to an extent I kind of agree because um, you, it’s wonderful to have all that attention from your parents. But, it can, you can end up becoming, sort of spoiled and um used to having this attention, so when you have to go to school or you have to interact with other people, if you don’t get the attention that you’ve been used to, you can react in a, in a really spoiled way without, sort of, meaning to.

Speaker 3   I’ve got two children and although they fight all the time and they, you know, all this sort of thing, I think, I often when they are fighting try and look at the positives of it and think, well, I suppose it’s a good thing that they are sort of, you know, learning to do all those things within a safe family environment, which I suppose if you are, I mean, if you are an only child, perhaps then it has to be at school or, you know, it’s like practicing.

Speaker 4   I’d hate to have been an only child, I mean I had three brothers and sisters, and I think only, the girl next door was an only child and she was under so much pressure from r.er parents to succeed and all their hopes were focused on this one girl…I thought, I wouldn’t want all that pressure on me.