A. Now listen to what happened to The Stig and look at the map. What route did he take? What information or warning do you hear when you are travelling on the Tube?

He took a bus from Kew Bridge to Acton Town. Then he took the Underground (District line) from Acton Town to Monument. Then at Monument, he changed onto the Docklands Light Railway, which he took to London City Airport. The train now approaching is…; Please mind the gap between the train and the platform; The next station is Monument.

N   The Stig was using public transport for the first time in his life! He saw a big, red thing coming towards him. A bus! He got on it, and used his Oyster card to pay. Ten minutes later, he got off and got the Tube at Acton Town, to take the District line to Monument. Eighteen stops!

T   The train now approaching is a District line train to West Ham. Please mind the gap between the train and the platform.

N   The Stig noticed that everyone was reading a newspaper, so he picked up a free one that was on a seat and started reading.

T   The next station is Monument. Change here for the Central line and the Docklands Light Railway.

N   He got off the Tube and ran to the platform for the Docklands Light Railway. After a few minutes, a train arrived. Now it was just ten stops and he would be there!

B. Write down the order in which you now think the three people arrived. Then listen to what happened? What order did they arrive in? Why do you think that Jeremy Clarkson was annoyed?

Because Top Gear is a car programme, and the car came last.

Jeremy Clarkson, who had travelled in the boat, ran into London City airport and ran straight to the check-in desk.

The man at the check-in desk said, ‘Unfortunately, a gentleman on a bike has checked in already.’ Jeremy couldn’t believe it! He looked at Richard Hammond, who was standing nearby laughing.

They waited for the other two to arrive. They needed public transport to come last. Top Gear, after all, is a programme about cars. A few minutes later came The Stig. He was third.

And fifteen minutes later, James, who had come by car, arrived at the airport. Disaster! Public transport had beaten the car!

Now listen to the interview. Number the activities below 1-8.

These are some of the things that drivers do or feel when they’re driving, which are the main causes of accidents. 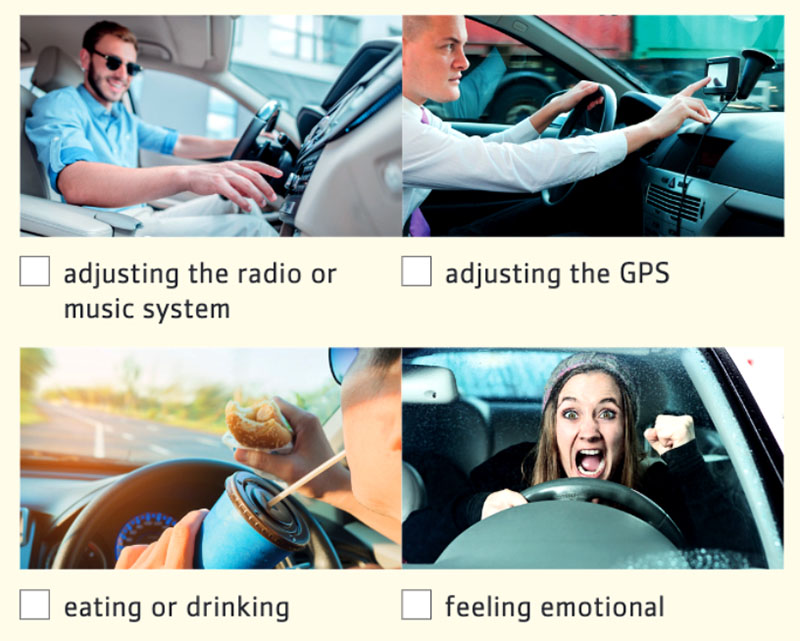 2   reaching for something in the car

3   looking at something by the road

6   adjusting the radio or music system

8   talking to a passenger

H   Hello and welcome. On today’s show, we’re talking about how to drive safely. A new book called Survive the Drive has just been published, and we asked Tom, our transportation and travel correspondent, to take a look. Welcome, Tom.

H   So, tell us – what’s the most dangerous thing you can do while you’re driving? Obviously, we’re not talking about drinking alcohol, taking drugs, or using a handheld phone to make calls or text, which everyone knows you must never do.

T   Well, this is really surprising: at the top of the list is driving when you’re feeling emotional. The researchers found that you’re nearly ten times more likely to have an accident if you’re feeling very sad or angry or stressed. If you’re emotional, then you can’t concentrate on the road, and you’ll probably make bad decisions if you find yourself in a dangerous situation. In fact, if you’re feeling very emotional, it’d be better not to drive at all!

H   Wow, OK. I’ll try to remember that next time I have a bad day at work! What’s the second most dangerous thing?

T   This one’s less surprising – it’s reaching for something in your car. It might be your phone, or a map, or some candy. If you’re reaching down, or trying to get something from the back seat, then you aren’t looking at the road, and you’re nine times more likely to have an accident.

T   Number three is looking at something interesting or something that’s happening by the road. A really common example of this is when people slow down to look at an accident – they don’t realize that by looking at the accident and not at the road, the chance of having an accident themselves goes up over seven times. In fact, this is a really common cause of accidents on freeways.

H   So the message is: don’t be distracted.

H   So that’s the top three – what about other things to avoid?

T   Well, at number four is adjusting your GPS, which can be very distracting, and makes you nearly five times more likely to have an accident. At number five is driving when you’re tired. Sixty percent of drivers say they’ve driven when tired in the last year, so it’s a big problem – and you can lose control of your car completely. At number six is adjusting your radio or music system. This makes you twice as likely to have an accident. Again, it’s the distraction from the road that’s the problem, and only having one hand on the wheel.

T   The seventh is eating or drinking, because again, you usually take one hand off the wheel, and the eighth is talking to a passenger, which can be distracting because the driver often turns to look at the passenger.

H   So how would you summarize the research? What did you find most interesting?

T   I think for me, the most interesting thing is that some of these things don’t seem very dangerous, and good drivers often do them – but the research shows that they are. So next time you get in your car to drive somewhere, think about what you’re doing, and always, always keep your eyes on the road!