A. Listen to a School of Life presentation called Why small pleasures are a big deal. Number the slides the presenter mentions in order, 1-9. Which things from the slides does he say are ‘small pleasures’? 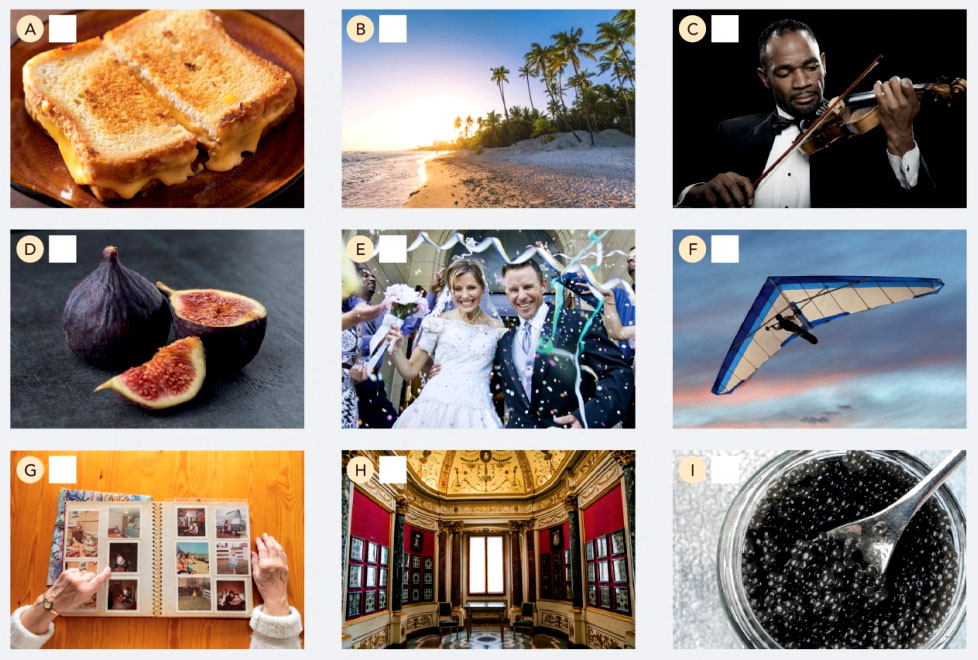 B. Listen again and complete the sentences with a word or short phrase.

5   We assume that someone who cycled to the local park didn’t enjoyed themselves as much as someone who ________.

Small pleasures: (A) cheese sandwich, (D) eating a fig, (G) scanning through old photos of when you were a child

3   scruffy clothes, on a street corner

5   went on a trip to a Caribbean island

Nowadays we’re surrounded by some powerful ideas about the sort of things that will make us happy. The first of these is that we tend to think that really to deliver satisfaction, the pleasures we should aim for need to be rare. We’ve become suspicious of the ordinary, which we assume is mediocre, dull, and uninspiring, and likewise we assume that things that are unique, hard to find, exotic, or unfamiliar are naturally going to give us more pleasure.

Then, we want things to be expensive. If something is expensive, we value it more, whereas if something is cheap or free, it’s a little harder to appreciate. The pineapple, for instance, dropped off a lot of people’s wish list of fruit when its price fell from exorbitant (they used to cost the equivalent of hundreds of dollars) to unremarkable.

Caviar continues to sound somehow more interesting than eggs. Then, we want things to be famous. In a fascinating experiment, a well-known violinist once donned scruffy clothes and performed at a street corner and was largely ignored, though people would flock to the world’s greatest concert halls to hear just the same man play just the same pieces.

Lastly, we want things to be large scale. We’re mostly focused on big schemes that we hope will deliver big kinds of enjoyment: marriage, career, travel, getting a new house.

These approaches aren’t entirely wrong, but they unintentionally create an unhelpful bias against the cheap, the easily available, the ordinary, the familiar, and the small-scale. As a result, if someone says they’ve been on a trip to a Caribbean island by private jet, we automatically assume they had a better time than someone who went to the local park by bike. We imagine that visiting the Uffizi Gallery in Florence is always going to be nicer than reading a paperback novel in the backyard. A restaurant dinner at which Lobster Thermidor is served sounds a good deal more impressive than a supper of a cheese sandwich at home. The highlight of a weekend seems more likely to be a hang-gliding lesson, rather than a few minutes spent looking at the cloudy sky. It feels odd to suggest that a modest vase of lily of the valley (the cheapest flower at many florists) might give us more satisfaction than a Van Gogh original.

And yet the paradoxical and cheering aspect of pleasure is how unpredictable it can prove to be. Fancy vacations are not always 100% pleasurable. Our enjoyment of them is remarkably vulnerable to emotional trouble and casual bad moods. A fight that began with a small disagreement can end up destroying every benefit of a five-star resort. Real pleasures often seem insignificant – eating a fig, taking a bath, whispering in bed in the dark, talking to a grandparent, or scanning through old photos of when you were a child – and yet these small-scale pleasures can be anything but small. If we actually take the opportunity to enjoy them fully, these sort of activities may be among the most moving and satisfying we can have.

Fundamentally, this isn’t really about how much small pleasures have to offer us. It’s about how many good things there are in life that we unfairly neglect. We can’t wait for everything that’s lovely and charming to be approved by others before we allow ourselves to be delighted. We need to follow our own instincts about what is really important to us.

A. Listen to a man suggesting some ten-minute activities to try. Write S for summer and W for winter next to the activities.

B. Listen again and mark the sentences T (true) or F (false).

2   A walk in the morning helps you start your day in the right way.

3   There are enough salad recipes to be able to eat a different one every day for about a month.

4   Doodling does not require you to use your imagination.

5   According to the man, it’s fun to write about something you have very strong feelings or beliefs about.

6   The language app only offers a very limited number of languages.

7   The app provides a series of games for a fixed price.

I found The School of Life’s presentation about small pleasures extremely encouraging, so much so that it motivated me to think up some small-scale ten-minute activities for you all to try. Here are just a few of them.

Summer is just around the corner, so let’s start with things you can do outside. First of all, do some vigorous exercise that you enjoy like running, riding your bike, or even jumping rope. Just two ten-minute sessions a day – once in the morning and once in the evening – will make you happy and decrease your anxiety. So make the most of those longer days and get out there!

If you don’t enjoy vigorous exercise, you could try walking to work for a month. If that isn’t possible, you could walk to public transportation or get up early every day and walk around the block for ten minutes. Walking is a great way to start the day and you’ll soon discover that fresh air is your friend.

Apart from physical activity, summer is a great time to look at what you eat. Why not make a new salad every day? It’s possible to quickly make at least 30 different salads, and there are some marvelous recipes out there. This challenge has the added bonus of being a health kick as well.

So much for the summer months; what about when it starts to cool off and you have to stay indoors? One thing you could do is doodle – draw pictures or designs on paper. All you need is a pencil or pen, and some paper. Start by drawing small shapes and lines. As you move your pen or pencil over the paper, your doodle will turn into a distinct picture. Doodling is fun, simple, and creative, and it can be done in ten minutes or less!

If you prefer writing to drawing, you could start your own blog. Pick something you’re really passionate about and start blogging about it for ten minutes a day. It’s fun, free, and so much more satisfying than scrolling through Twitter or lnstagram!

Another ten-minute activity for the winter months is to learn a new language. There’s another app that provides a fun, game-like way to learn languages such as French, German, Italian, Spanish, Portuguese, Turkish, Chinese, Japanese, or Korean – for free.

These are just a few ideas for you to try, but the possibilities are endless. All you need to do is pick an activity, carve out ten minutes in your day, and get started. I’m sure you won’t regret it!