Practice English Listening B2 Exercises – What photographs remind us of

1. Listen. Match the photographs with the speakers. The speakers are in the right order. 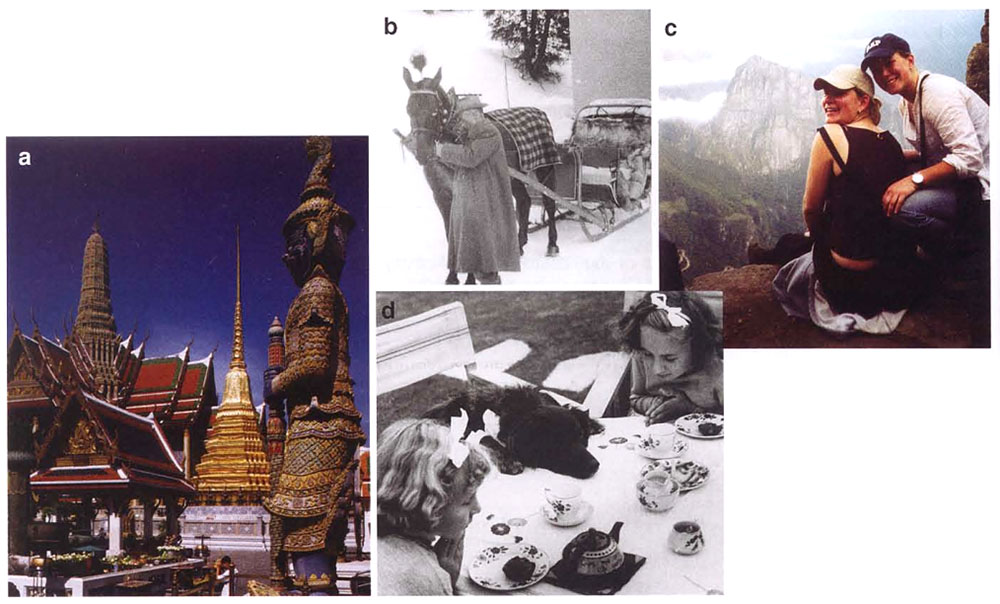 How old do you think the speakers are? Why?

f   … went to a place that looked better than pictures of it do?

i    … had a seaside holiday every summer?

3. Listen again. What are the speakers talking about? Write one of the names in the blanks (you will use some names more than once).

Peter is middle-aged (he talks about having a box camera as a child).

Jane and Kate are young women (Kate lived in Thailand with her parents ren years earlier).

Berry is an elderly woman (she makes her childhood sound distant).

k Kate (and her family)

a Bangkok   b The Grand Palace   c Thailand

I took this picture when I was about ten, I think. My parents had taken me to a place called Arosa in Switzerland. They’d decided to learn how to ski. It was quite a surprise I think because before that we’d only ever been on holiday in England. We used to go to the seaside every summer. But this winter, for some reason, well I don’t know. Anyway, they’d given me this box camera for Christmas. Box cameras were just that, a little box with a funny little viewfinder to look through, and film, quite big, which is funny considering you got such small prints!

I loved skiing and the snow. D’you know I think it was my first time abroad ever. But all that fresh mountain air and racing down the slopes. It was really great. Fantastic. I haven’t been skiing for years. I’ve probably forgotten how to.

I wonder what happened to that box camera. It was so primitive compared to the digital ones you get nowadays.

I really love this picture. It’s me and my sister on the old Inca trail, you know, in Peru. Well it’s something I’d always wanted to do, and then when my sister spent a few months in Chile between school and university I went out and joined her. It was one of the best trips I’ve ever done. We went up through Chile, then Bolivia and into Peru. Like everyone who goes to South America we wanted to see the fabulous old Inca city of Machu Picchu, so we travelled to Cuzco which is the old capital of the Inca empire, you know before the Spaniards got there in the 16th century and started their 300-year rule in that part of the world. Well not 300 years exactly. Anyway, so you leave Cuzco and walk the Inca trail. It’s spectacular scenery. And then, when you get to Machu Picchu itself, well it’s absolutely fantastic, just as good as everyone says and much much better than any photograph you’ve ever seen of it. There are places like that aren’t there, you know, no matter how often you’ve seen photographs it’s just not a patch on the real thing. Machu Picchu was like that.

Oh yeah, that’s the Grand Palace in Bangkok. In Thailand. It’s a fantastic place. I mean, I haven’t been in Thailand for tell years, but I can remember it really well. I loved Bangkok better than some of the other places. Well I can hardly remember Egypt cos I was just a kid then, and I didn’t specially like the school I was in in Johannesburg when we were there. But Thailand. Thailand was really cool.

My dad was a diplomat – well he still is – and my Mom’s a teacher. That’s why we lived in so many different places.

The Grand Palace dates back to the 18th century, I think. That’s when King Rama J had it built. See, I really paid attention to all that stuff. I think I remember it correctly anyway. It’s a fantastic place. There are temples and pagodas and some incredible wall paintings. I went there quite a few times. Well every time friends or family would come out to visit we’d take them to different places, you know, kind of like tourist guides cos we knew what to show them, and at the palace they’d be like ‘wow! that’s fabulous!’.

I’d so like to go back to Bangkok and see some of my friends there. Maybe I will next vacation. Maybe.

Oh no, look at that! That’s me and my dog Sally … well, and my sister, of course. I wonder how old I was then. I must have been, what, about six or seven. I loved that dog. We went everywhere together. Well, in my memory we did anyway. I used to take her over the fields to my friend’s house, and in the summer she’d come with us on long walks when we went on holidays. We used to go to this farm in the hills. I loved that, so did my brothers. We used to have a fantastic time.

And Sally! D’you know I haven’t thought about her for years. I loved that dog. And then when I was about 11, they sent me away to school and the dog passed away. I was heartbroken. It was so difficult being young back then. A lot easier now, I call tell you.