1. Listen to Track 1 and choose the best interpretation.

a   The man is a doctor and he’s trying to help the woman.

b   The woman is trying to ignore someone who is talking too much.

c   The man is trying to persuade the woman to marry him.

d   The woman is so bored that she has fallen asleep. 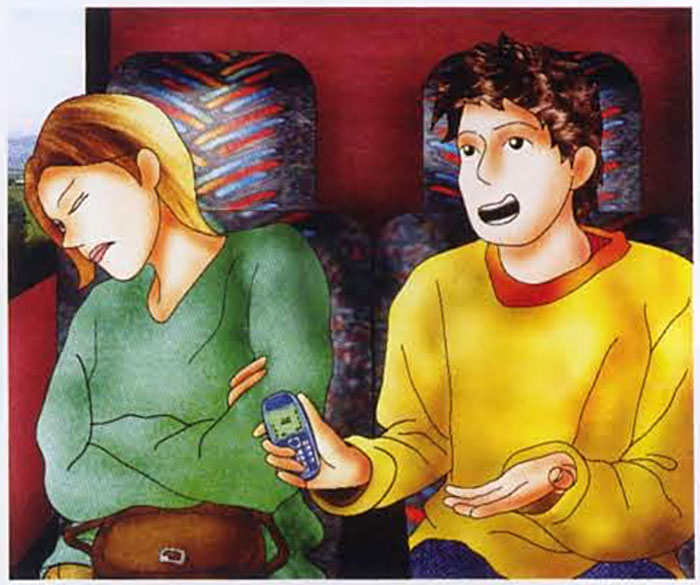 Er … So this woman gets on a bus for the start of a long journey from Paris to London. She soon finds out that the man she’s sitting next to is a talker – he just won’t shut up. And she just wants to sleep for the whole journey so she’s a bit disappointed. The guy keeps asking her questions and then, to make matters worse, he turns to her and asks her if she’d like to play a game. She says ‘No, thank you’ as politely as she can and closes her eyes to go to sleep, hoping he’ll get the message.

2. Listen to Track 2 and circle the correct answer.

3. Listen to Track 2 again and check whether these statements are true or false according to what you hear.

4. Complete the sentences below with words and expressions from Tracks 1 and 2.

a shut up   b make matters worse

e comes to the conclusion   f all keen

i flabbergasted   j put me out of my misery

WOMAN:   … to make matters worse he turns to her and asks her if she’d like to play a game. She says ‘No, thank you’ as politely as she can and closes her eyes to go to sleep, hoping he’ll get the message.

The woman can’t believe her bad luck. This is the last thing she wants to do, so again she says that she’s not interested and turns away from him to try to get to sleep. The man is getting more and more frustrated and desperate to play by this time, so he decides to change the rules to see if that will tempt her. ‘OK,’ he says, ‘if you don’t know the answer you only have to pay me £1 and if I don’t know the answer, I’ll pay you £20.’

So, the woman analyses the situation and comes to the conclusion that the only way to get some sleep is to play this ridiculous game, so she finally agrees to the game. So as you can imagine, the man is all keen when he asks the first question: ‘How far is it around the earth?’. The woman doesn’t say a word – she just reaches into her handbag, takes out £1 and gives it to the man.

So now it’s the woman’s turn. She looks him right in the eyes and says, ‘What’s green in the morning, blue in the afternoon and red in the evening?’. The man looks shocked. He thought this was going to be a piece of cake for him – what could this woman possibly know that he doesn’t know? He gets on his mobile phone and calls all his friends, gets on the Internet using his phone and searches every reference he can, but still can’t get the answer. He sends e-mails to famous professors, but no one knows the answer.

Finally, after a couple of hours he wakes the woman (who’s been sleeping soundly all this time) and admits to being beaten. ‘I don’t know the answer!’ he whispers, weeping with despair. ‘Here’s your £20’. Without a word, the woman takes the money and puts it in her bag and goes straight back to sleep. So, the man is completely flabbergasted and through his tears he wakes her and begs for the answer. ‘Please put me out of my misery,’ he pleads, ‘what’s the answer?’ The woman reaches into her bag and gives him a pound.