Practice English Listening B2 Exercises – Speaking to the world

A. Listen and number the pictures in the correct order. 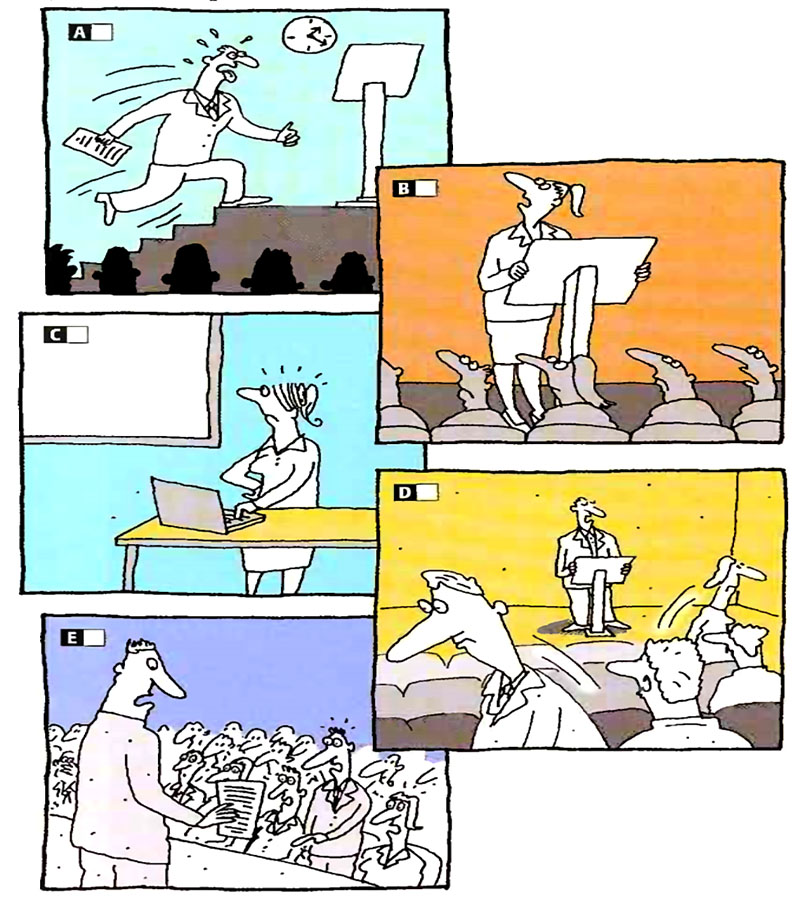 B. Listen again and write 1-5 in the boxes. Which speaker…?

A   ◻ couldn’t understand why nobody found his / her talk amusing

B   ◻ felt very relaxed before his / her presentation

C   ◻ did the last part of his / her talk very quickly

A   speaker 2   He had given exactly the same presentation the year before.

B   speaker 5   He hadn’t realized that Paris was one hour ahead of London, and arrived late for his presentation – which was about how to manage your time better.

C   speaker 1   A bat was flying around the room and she was scared of bats.

D   speaker 4   She touched the wrong button on the computer and deleted the presentation.

E   speaker 3   He didn’t realize that the zip on his trousers was undone.

I was giving a talk to about two hundred people in a large hotel room in Poland. About halfway through the talk, I realized that something was flying around the room. At first I just ignored it, as I thought it was probably a bird that had come in through the window, but after a while I noticed that the women in the audience were following its movements with their eyes and were not looking very happy. It was then that I realized that it was a large bat. The next moment I could see from the audience’s eyes that it was directly above my head. I’m really frightened of bats, and I just panicked. I tried to carry on, but I couldn’t concentrate and I kept forgetting what I was going to say. So I hurried through the last part of the talk, and then as soon as I finished, I rushed out of the room. It was awful, I’ll never forget it!

I get invited to give talk to teachers all around the world, and this time I was in Mexico giving a talk to some English teachers. Though I say it myself, I think I’m a good speaker and usually the audiences enjoy my talks and are interested in what I’m saying. But after about ten minutes, I realized that something was wrong. The audience weren’t laughing at my jokes and some people were looking very unhappy. Then I saw several people get up and walk out of the hall. I just couldn’t work out what was going on. I’d given a presentation there the year before and the audience had been really enthusiastic. In the end, I just stopped and asked them, ‘Is anything the matter? You don’t seem to be enjoying this.’ And one teacher said ‘Actually the problem is that you gave exactly the same talk last year, so we’re heard it all before.’ I didn’t really know what to do at this point. I just apologized profusely and invited the people who had already heard the talk to leave, which, unfortunately, was almost everybody.

I was giving a presentation to a rather serious group of businessmen in Germany. They listened politely for 45 minutes, and at the end I asked for any questions. Nobody said anything. Then a young man stood up and said to me, ‘Sir, you are open.’ I looked down at my trousers and realized that I was.

I had to give a talk to some students at Imperial College in London. It’s the science and technology department of London University, so I didn’t think there would be any problem with the equipment. I’d seen the auditorium before and it was a nice room, good sound and screen, etc. But as soon as I began my talk, people started complaining that they couldn’t see the slides – there was something wrong with the projector and the screen was too dark. So I started touching keys on my laptop, and I don’t know what I did, but I managed to delete the whole presentation. So there I was with no presentation notes at all, nothing, and I had to improvise from what I could remember. It was all very embarrassing, I must say.

I had to give a business presentation to a company in Paris, and after I’d got there and checked into my hotel, I thought I’d go for a walk as it was such a beautiful day and I had plenty of time. My talk wasn’t until one o’clock and I was well prepared. I was strolling along by the river enjoying the sunshine when I noticed that several people at the cafés were already having lunch. I thought it was a bit early for lunch and I checked my watch – it was only a quarter to twelve. And then I suddenly realized that I’d forgotten to change my watch. The UK is one hour behind France, so that meant it was in fact quarter to one. My presentation was supposed to start in 15 minutes’ time. I desperately looked for a taxi to take me first back to my hotel and then to the company’s offices where I was going to give the presentation. I finally arrived 20 minutes late and very stressed – and the worst thing of all was that the title of the talk I was giving was ‘How to manage your time better!’