Look at the photo. Predict who the people are, where they are, and what they are arguing about. Listen and check. Who is the “guilty” person in the photo? 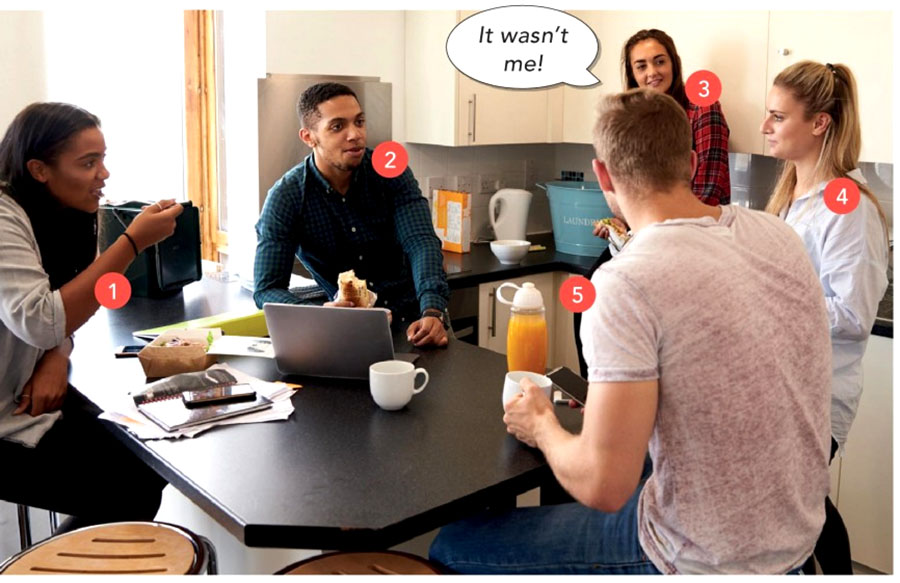 The people are roommates, and they are in the kitchen of their shared house. One girl is accusing the others of using her milk.

The others defend themselves, but in the end, it is established that Jack (5) used her milk in his coffee.

M1   I haven’t seen it. You must have finished it.

F1    I definitely didn’t finish it. I was keeping some for my cereal this morning. One of you must have used it.

F2    It can’t have been me. I only drink my oat milk. Could you have finished it last night and then forgotten? Did you have something before going to bed?

M1   Someone might have given it to the cat.

F1    Oh, come on. We all know she drinks water, not milk. I’m telling you, last night I know there was some milk in the refrigerator. My milk.

M1   Well, I don’t know what happened to it. In any case, you should have put your name on it.

F3    And it wasn’t me, because I stayed at my mom’s last night, and I had breakfast there before getting back here.

F1    Yes, white coffee. That’s where my milk went. You didn’t have any milk of your own in the refrigerator.

F1    Well, you can go to the supermarket and get me some more.

A. Listen to a psychologist giving some tips about how to argue better. Which two general points does she make?

___ 4   Always involve another person to mediate.

1   “Look, you’re not doing your share of the housework.”

2   “I think we should take another look at how we divide up the housework.”

4   “You always forget our wedding anniversary.”

5   “I didn’t mean to shout. I’d rather not argue with you, but this is very important to me.”

6   “And another thing: I was really disappointed with my birthday present.”

7   “I’d rather talk about this tomorrow, when we’ve both calmed down.”

Sts should have checked 2 and 3.

1 ✗ Because you’re beginning the conversation in a very negative way.

4 ✗ Because it may only have happened once, and it will make the other person get very defensive.

5 ✓ If you can talk calmly and quietly, the other person will be more responsive.

6 ✗ Concentrate on solving the problem you’re having now.

7 ✓ This can stop an argument that’s getting out of control.

In life, we sometimes have disagreements with people. It could be with your partner, with your boss, with your parents, or with a friend. When this happens, the important thing is to try not to let a difference of opinion turn into a heated argument. But of course, it’s easier said than done.

The first thing I would say is that the way you begin the conversation is very important.

Imagine you live with your partner, and you’re feeling annoyed because you feel that you always do most of the housework. If you say, “Look, you’re not doing your share of the housework,” you’re beginning the conversation in a very negative way, and the discussion will very soon turn into an argument. It’s much more constructive to say something like, “I think should take another look at how we divide up the housework. Maybe there’s a better way of doing it.”

My second piece of advice is simple. If you’re the person who’s in the wrong, just admit it! This is the easiest and best way to avoid an argument. Just apologize – say to your roommate, your parents, or your husband, “Sorry, it was my fault,” and move on. The other person will have more much respect for you if you do that.

The next tip is, don’t exaggerate. Try not to say things like, “You always forget our wedding anniversary,” when maybe this has only happened once before, or, “You never ever remember to turn off the lights.” This will just make the other person get very defensive because what you’re saying about them just isn’t true.

If you follow these tips, you may often be able to avoid an argument. But if an argument does start, it’s important to keep things under control, and there are ways to do this.

The most important thing is not to raise your voice. Raising your voice will just make the other person lose their temper, too. If you find yourself raising your voice, stop for a minute and take a deep breath. Say, “I didn’t mean to shout. I’d rather not argue with you, but this is very important to me,” and continue calmly. If you can talk calmly and quietly, you’ll find the other person will be more ready to think about what you’re saying.

It’s also very important to stick to the point. Try to keep to the topic you’re talking about. Don’t bring up old arguments, or try to bring in other issues. Just concentrate on solving the one problem you’re having, and leave the other things for another time. So, for example, if you’re arguing about the housework, don’t suddenly say, “And another thing, I was really disappointed with my birthday present – you didn’t make any effort at all.”

And my final tip is that, if necessary, call “Time out,” like in a sporting event. If you think that an argument is getting out of control, then you can say to the other person, “Listen, I’d rather talk about this tomorrow when we’ve both calmed down.” You can then continue talking about it the next day, when maybe both of you are feeling less tense and angry. That way, there’s a better chance that you’ll be able to reach an agreement. You’ll also probably find that the problem is much easier to solve when you’ve both had a good night of sleep.

But I want to say one last thing that I think is very important. Some people think that arguing is always bad, but that isn’t true. Conflict is a normal part of life, and dealing with conflict is an important part of any relationship, whether it’s three people sharing an apartment, a married couple, or just two good friends. If you don’t learn to argue properly, then when a real problem comes along, you won’t be prepared to face it together. Think of all the smaller arguments as training sessions. Learn how to argue cleanly and fairly. It will help your relationships become stronger and last longer.