Practice English Listening B2 Exercises – It’s all an act

A. Look at the movie still of Keira Knightley. What kind of movie do you think it is? Focus on her expression and body language and choose a, b, or c to complete sentences 1-3 below. Now listen to a movie critic describing what’s happening in the scene and check your ideas. 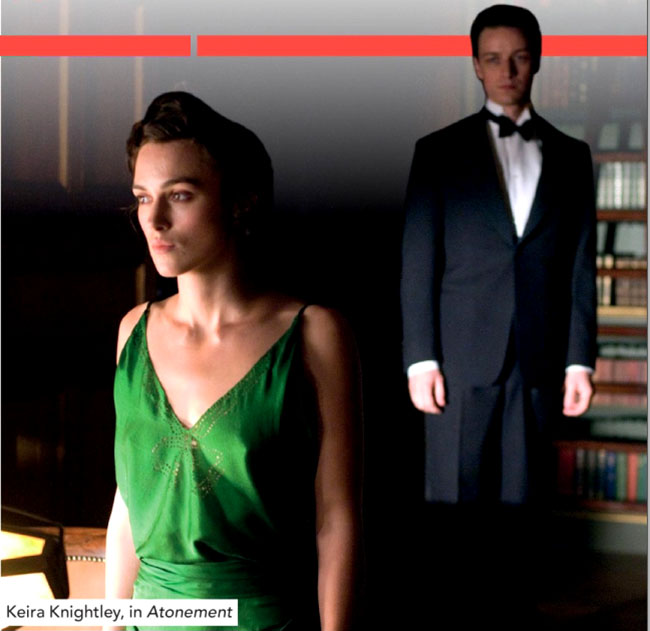 a   the daughter of a rich family.

b   a servant who has dressed up in her mistress’s clothes.

c   a singer who is about to perform.

a   she’s just broken off a relationship.

b   she’s running away from someone she dislikes.

c   she’s unsure about what to do.

This still is from the movie Atonement, a period drama set in the 1930s. It shows Keira Knightley, who plays Cecilia Tallis, the elder daughter of a wealthy family, and James McAvoy who plays Robbie, the son of the family’s housekeeper. Cecilia is studying at Cambridge University, and, unusually, Robbie is too, his studies being paid for by Cecilia’s father. Despite moving in very different circles in school, they have always been close and they are now back at the family home for the holidays. This evening, there’s going to be a dinner party, to which Robbie has been invited. In this shot, he is following her in to dinner. She is feeling anxious and indecisive, because she has just realized that she is in love with him, but knows that their relationship would be frowned on given their difference in status. Despite this, soon after they declare their love for each other. The movie was one of Knightley’s first big starring roles. It won several awards and was nominated for several others, including costume design. This green dress is one of the stunning outfits she appears in.

B. Look at four more movie stills. Decide which of the movie types they belong to. Listen to the movie critics and check your answers. 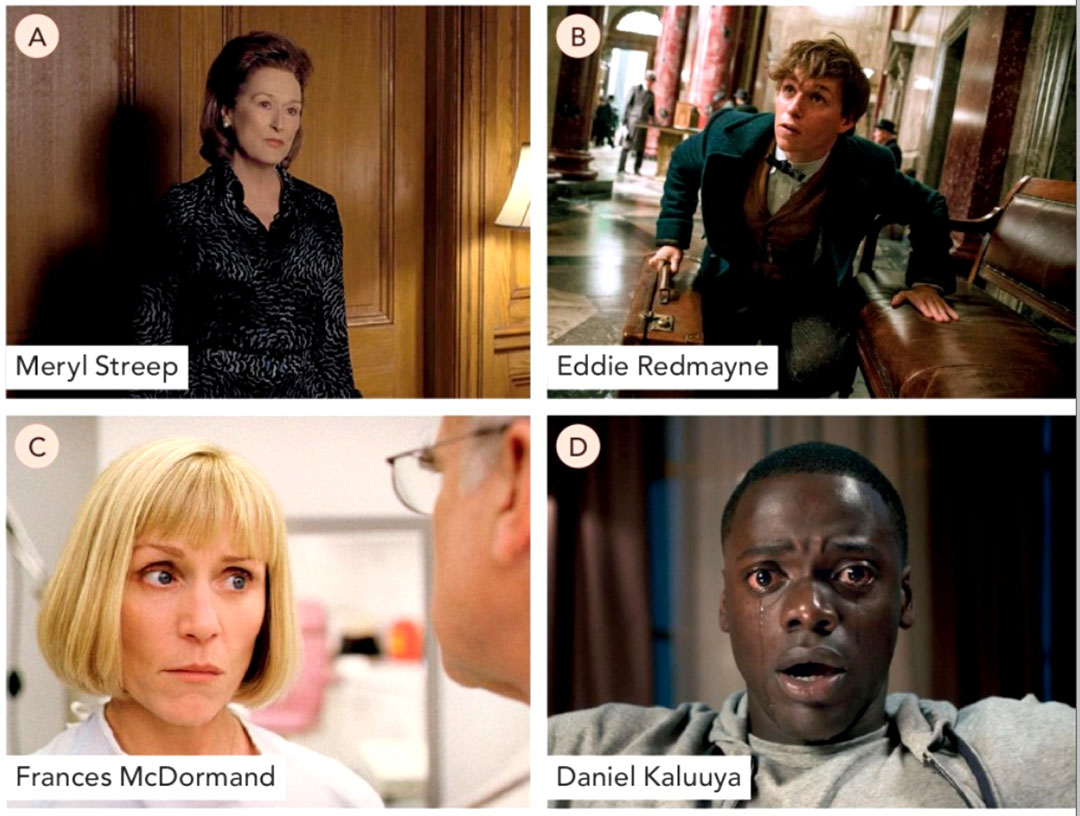 B fantasy (Fantastic Beasts and Where to Find Them)

D horror (Get Out)

Meryl Streep was nominated for an Oscar for her performance as Katherine Graham in The Post. The movie is about how Graham, the first female publisher of a major American newspaper – The Washington Post – and her staff, published classified government documents about the US’s involvement in the Vietnam War. The movie, set in 1971, focuses on Katherine as she tries to balance the deaths of her husband and father with managing the newspaper and a busy social life. Katherine feels nervous about running the newspaper because she has little business or journalistic experience. In this still, Katherine is talking to the paper’s executive editor about possibly getting and publishing US government secrets about the war. Her expression shows a mixture of feelings: concern for publishing the material and risk facing legal action from the US government, perhaps some disappointment that the US government had these secret files, and perhaps some worry as she weighs making the right decision for herself, her paper, and the United States.

This is a scene from the fantasy movie Fantastic Beasts and Where to Find Them, which is a prequel to the Harry Potter movies. Set in 1926, the movie stars Eddie Redmayne as the wizard Newt Scamander, who comes to New York with a suitcase containing several magical creatures. When he’s at the bank, one of the creatures escapes from the suitcase. In this scene, he is desperately trying to recapture it, and is watching, horrified, as it starts stealing things from people in the bank. J.K. Rowling herself both wrote the script and co-produced the movie, and it was the first movie set in Harry Potter’s wizarding world to win an Oscar.

Frances McDormand, who won an Oscar for best actress in Three Billboards Outside Ebbing, Missouri, is without doubt one of the most versatile actresses of her generation. This still is from the Coen brother’s black comedy Burn After Reading, which also starred George Clooney and Brad Pitt. McDormand plays the role of Linda Litzke, a personal trainer who, with her co-worker Chad, tries to steal money from a retired CIA worker. Linda is in desperate need of money, mainly because she’s obsessed with expensive cosmetic surgery. In this scene, she’s discussing with the doctor the work she wants done. During the discussion, the doctor has suggested that she have an operation to get rid of her crows’ feet – the lines and wrinkles around the eyes. Linda protests that they’re baby, tiny crow’s feet, and as the doctor explains the procedure, she feels more and more unsure and indecisive about what to do. The genius of McDormand’s acting is that although the character of Linda is self-centered, superficial, and not very bright, McDormand manages to portray her as a true American heroine.

This still shows Daniel Kaluuya in the 2017 American horror movie Get Out. Daniel plays the role of Chris, a young black photographer who goes to meet the parents of his white girlfriend Rose, who live in a large house in the country. Although the parents try to make it clear that they are not at all racist, Chris quickly realizes that there is something very strange about them, and about the black servants they employ. In this scene, Rose’s mother, a psychiatrist who practices hypnotherapy, is hypnotizing him. Although in theory it is to help him to stop smoking, here she gets him to relive the horror and the shock of the evening when he was six years old and his mother was killed in a car accident. Kaluuya was nominated for an Oscar for his performance, and the movie won the Oscar for best screenplay.

A. Look at the names of three exercises. Listen to a drama teacher explaining the exercises to his students. Which exercise helps with…?

Exercise 3   What were they wearing?

B. Listen again and complete the instructions.

paying attention to details   3 (What were they wearing?)

1 an animal   2 imagine stroking it

3 mime the action for the rest of the group

12 situations that make you feel angry

Exercise 2 is called Stroking an animal.

This exercise is often used in drama classes for beginners, to help them to develop their body language. It should be done in a group. Each person must think of an animal they really like. It can be a wild or tame animal, big or small. Then imagine stroking it. Think about where it is: in your hand, in your arms, standing or sitting next to you. Now, one by one, mime the action for the rest of the group. They have to guess which animal it is.

OK, now, exercise 3 is called What were they wearing?

This exercise is aimed at developing attention. Attention is very important for an actor because you have to be able to observe every detail of other people.

The exercise is done in a group, with one person acting as the host. In a group, sit in a circle and, for three minutes, try to focus on what everyone is wearing. It’s important to remember as many details as you can: clothes, accessories, etc. After three minutes, close your eyes unless you are the host of the game, and the host asks questions, for example, “Anna, tell me, please, what’s Helen wearing?”, “John, what color are Anna’s shoes?” etc. At the end, everyone opens their eyes and checks the answers.

The last exercise we’re going to do today is exercise 4, The “magic” image.

Showing emotions onstage or on camera can be very hard for some beginners. One trick, which this exercise helps with, is to develop a way of recalling the desired emotion.

The exercise can be done individually or in groups. Choose one emotion, for example “anger,” and then on a piece of paper, write down some situations that make you angry – for example, noisy neighbors, or bad drivers. If you are doing this in a group, show each other what you’ve written down – you may want to choose some ideas from another person’s list to add to your own list. Choose no more than five situations in total. When you have your final list, think of an image for each situation. For example, for noisy neighbors, it could be a dog; for bad drivers, a car, and so on. Now the important part – you need to create one new image on the sheet of paper which combines your separate anger images, for example, a car with a dog in the back, etc.

This is your “magic image” of anger. Recalling this image will help you to show anger when you‘re acting. You can do the same thing with other emotions, such as happiness, sorrow, and so on. So, now let’s actually do these exercises. We’ll start with number two, stroking an animal. So if you can get into groups of five or six, we’ll get going.