Practice English Listening B2 Exercises – In an art museum

1. Look at this list of events in the life of the painter Vincent van Gogh. Listen and put them in the right order.

You’re listening to the self-guided tour of the Van Gogh Museum in Amsterdam.

Vincent Willem van Gogh was born March 30th, 1853, in Groot-Zundert, son of a Dutch Protestant pastor. He was a moody young man who was easily bored and by the age of 27 he had been in turn a salesman in an art gallery, a French tutor, a theological student and an evangelist in Belgium.

In 1886, Van Gogh went to Paris to live with his brother Theo van Gogh, an art dealer, and became familiar with the new art movements developing at the time. Here, Van Gogh began to experiment with the modern techniques that were popular at the time.

In 1888, Van Gogh left Paris for southern France, where he painted scenes of the fields, the peasants and lives typical of the people who lived in the countryside. During this period, living at Aries, he began to use the swirling brush strokes and intense yellows, greens and blues associated with some of his most famous paintings such as Bedroom at Arles, and Starry Night.

In his enthusiasm, he persuaded the painter Paul Gauguin, whom he had met earlier in Paris, to join him. After less than two months, they began to have violent disagreements, culminating in a quarrel in which Van Gogh wildly threatened Gauguin with a razor. That same night, in a fit of deep remorse brought on by his many mental problems, Van Gogh cut off part of his own ear.

For a time, he was in a hospital at Aries. He then spent a year in the nearby mental asylum of Saint-Rémy, working between repeated spells of madness. Finally he left the mental asylum and lived for three months in a town called Auvers. Just after completing one of his most remarkable paintings, the ominous Crows in the Wheatfields, he shot himself on July 27th, 1890, and died two days later.

During his life, Van Gogh wrote more than 700 letters to his brother Theo, and these letters give us a remarkable picture of how he approached his art, what he painted and when, and his state of mind. He left behind about 750 paintings and 160 drawings. He only ever sold one painting in his lifetime, but now his most famous works (such as Sunflowers) sell for millions of dollars.

Press the number on the wall to hear about the works that you now see in front of you.

2. Look at these two pictures and listen to the descriptions from the museum audio tour. Write the number of the exhibit under the picture. 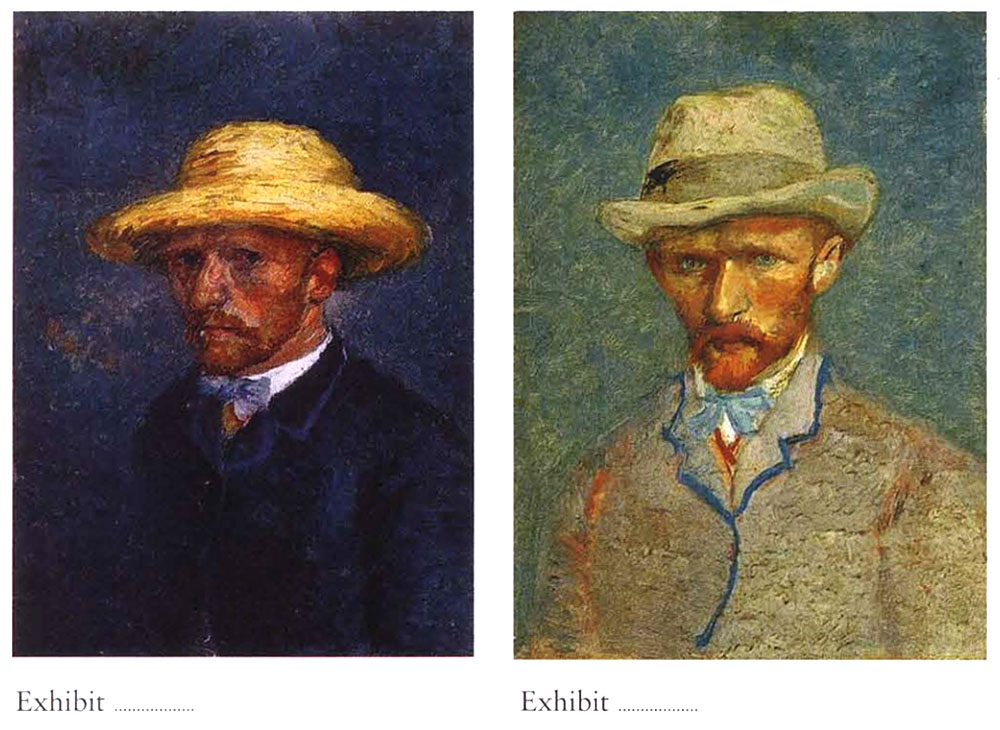 3. Listen again and tick whether these statements are true or false according to what you hear.

4. What do these words and phrases in bold from Track 1 and Track 2 mean here?

b   … became familiar with the new art movements developing at the time.

c   … scenes of the fields, the peasants and lives typical of the people who lived in the countryside.

d   … he began to use the swirling brush strokes …

f   … one of his most remarkable paintings, the ominous Crows in the Wheatfields …

g   The picture is full of varying tones of grey …

h   The red in his face and particularly in the beard makes the head stand out from the background.

i    Van Gogh was always looking for customers for portraits …

j    … the range of colours in the jacket, bow-tie and background.

The picture on the left is Exhibit 28, Man in a Straw Hat, by Vincent van Gogh.

The picture on the right is Exhibit 27, Man in a Felt Hat, by Vincent van Gogh.

a   his moods changed

b   things that were happening in the art world

f   menacing, suggesting something bad is going to happen

i   pictures of people

You’re listening to the self-guided tour of the Van Gogh Museum in Amsterdam. These exhibits are numbers 27 and 28.

The two pictures you see before you were both painted when Van Gogh was in Paris from 1886 to 1888. In that two-year period, he painted 27 self-portraits. This was because he often could not afford models and so painted himself in order to experiment with colour and different techniques.

The first picture, number 27, shows Vincent in an elegant suit and hat. It seems that Vincent used this picture in order to study grey. The picture is full of varying tones of grey and even the eyes, which are normally green, are painted in a dramatic blue-grey tone. The hat is made of felt. The red in his face and particularly in the beard makes the head stand out from the background. The kind of clothes he is wearing suggest fashionable Paris at that time and it seems that he is also advertising himself as a portrait painter. Van Gogh was always looking for customers for portraits as an important source of income.

The second picture, number 28, shows Van Gogh doing a study of colour yet again. Here, he seems to be looking at the effect of yellow against a blue background. Note also the range of colours in the jacket, bow-tie and background. The straw hat seems a strange combination with the suit that he’s wearing, and this makes it clear that the purpose of the picture was to experiment with colour.

Please press 29 to hear about the next painting or 0 to hear more information on the life of Vincent van Gogh.