1. Listen and circle the best answer.

d   ‘Hag’ was the name Ian James Hargreaves chose for himself when he was six or seven.

INTERVIEWER:   Why are you called Hag?

HAG:   Er because my surname is Hargreaves, Ian James Hargreaves, and when I was seven, six or seven at school, from Hargreaves you got Haggis, Hargreaves Haggis, which was shortened to Hag, simple as that and I kept it, because I don’t like Ian.

INTERVIEWER:   And you’ve been Hag ever since?

HAG:   I’ve been Hag ever since but when I went to college I had to carry it with me of course because people started calling me Ian and I hated being called Ian because the only people who called me Ian were teachers or parents

INTERVIEWER:   And Hag then became your professional name as well?

HAG:   It did, yeah everyone knows me as Hag, apart from a couple of annoying people. 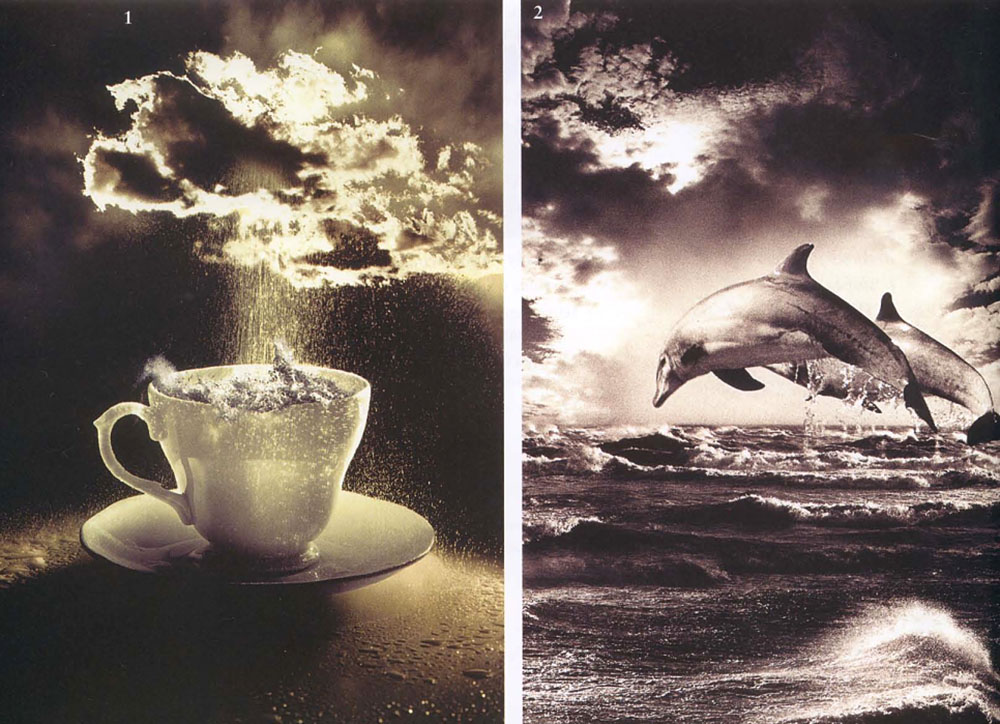 e   It is made by exposing the same piece of photographic paper to a number of different enlargers.   ……………

k   You make it by printing bits of different negatives onto the same piece of paper.   ……………

3. Match the words and phrases with their definitions.

2   another word for picture

4   showing shapes and colours, but not real objects

8   something like a blanker to cover you in bed

HAG:   I suppose, broadly speaking, I’m an illustrative photographer er in that I illustrate ideas by putting images together, by putting, you know several negatives into the same picture, usually to make a coherent image rather than an abstract image although I have been working with abstract ideas recently.

INTERVIEWER:   Can you give an example in words of the kind of thing you’re talking about?

INTERVIEWER:   And this is a number of different photographs blended into one?

HAG:   Yes, five I think, four, four or five. It’s done in a darkroom. I have, if I, I have got eight enlargers. It’s like having a multi-track recording studio if you like. I’ve got eight enlargers. Put a negative in each enlarger and prim the bit of the negative you need onto the same piece of paper and then move to the next enlarger and print the next bit you want onto that same piece of paper so you end up with an image that’s, all the elements are printed from the original negative. There’s no copying involved or anything. It’s just a question of masking it right so they fit together perfectly.

INTERVIEWER:   You make it sound very simple, but it isn’t simple at all is it?

HAG:   Aah. No. It isn’t simple at all. It’s just, you have to be patient. You have to understand a few things.

INTERVIEWER:   Who likes your combination pictures?

HAG:   I don’t know (laughs). People like them. I’ve sold hundreds and thousands of pictures throughout the world in posters and postcards and things. And people have bought those with their own money. It’s not like an art director in an agency you know thinks ‘I want to employ this trendy photographer’. They actually have to put their hands, they have to walk into a shop, they have to like it, they have to put their hands in their pocket and buy it with their own money and that’s very flattering.

INTERVIEWER:   Because there’ve been one or two have been very very successful posters, haven’t they?

HAG:   There’s been, yes, yes, I’ve had some very successful posters er, unfortunately the most successful one I don’t really like it just being a dolphin picture, some dolphins leaping out of the water, that was made into all sorts of things like er duvet covers and pillowcase sets, watches, docks, jigsaw puzzle, er there are other th- apart from the posters and cards and postcards. Yes, that kept me alive for a few years.

4. Listen. Is the following statement true or false?

Hag believes that computers and digital technology have made film obsolete.

5. Listen again and complete the following extracts with one word for each blank.

The statement is false. Hag thinks that people will still pay for a hand-made print that’s printed from each element.

a darkroom   b whole   c candlelight

HAG:   When I moved four years ago and built a new darkroom which took me all summer and was a terrible struggle, people said to me ‘Hag, why are you bothering building a darkroom? Do it on a computer.’ My answer was, well there’s two answers. Firstly I’m not Hag without a darkroom. I have to have a darkroom. Doesn’t matter whether I use it or not but it has to be there. I don’t feel whole without it. The second answer these questions, often come up while sitting in a restaurant eating a meal in candlelight. Now when were candles redundant, when were they obsolete technologically?

You know, 200 years ago? And there we are, we’re still sitting around a table eating meals with candlelight because it’s nice, because they have a certain quality what you cannot get anywhere else except by a naked flame and that live flame on the table has a certain essence that you do nor ger from a light-bulb. So we use the technologies, we use the tools for the qualities they have. A computer does not produce an original hand-made prim that’s primed from the … from each element er on to that piece of paper. Now people will pay for that rather than buying a digital file that’s been created on a computer and then printed, no matter how well. It is not the same thing, it is a reproduction of a digital file.

INTERVIEWER:   So film isn’t going to go away?