Practice English Listening B1 Exercises – You were really lucky!

A. Listen to writer Bernard Hare on a radio show talking about something that happened to him when he was a student. Summarize what happened. Use the words and phrases below.

hitchhike from Peterborough     the ticket inspector

I was living in a student flat in North London when the police knocked on my door one night. I thought it was because I hadn’t paid the rent for a few months, so I didn’t open the door. But then I wondered if it was something to do with my mother, who I knew wasn’t very well. There was no phone in the flat, and this was before the days of mobile phones, so I ran down to the nearest phone box and phoned my dad in Leeds, in the north of England. He told me that my mum was very ill in hospital and that I should go home as soon as I could.

When I got to the station, I found that I’d missed the last train to Leeds. There was a train to Peterborough, from where some local trains went to Leeds, but I would miss the connection by about 20 minutes. I decided to get the Peterborough train – I was so desperate to get home that I thought maybe I could hitchhike from Peterborough.

“Tickets, please.” I looked up and saw the ticket inspector. He could see from my eyes that I’d been crying. “Are you OK?,” he asked. “Of course I’m OK,” I said. “You look awful,” he continued. “Is there anything I can do?” “You could go away,” I said rudely.

But he didn’t. He sat down and said, “If there’s a problem, I’m here to help.” The only thing I could think of was to tell him my story. When I finished, I said, “So now you know. I’m a bit upset, and I don’t feel like talking anymore, OK?” “OK,” he said, finally getting up. “I’m sorry to hear that, son. I hope you make it home.”

I continued to look out of the window at the dark countryside. Ten minutes later, the ticket inspector came back.

B. Listen to the second part of the story and answer the questions.

1   What did the ticket inspector do for Bernard?

3   What did the ticket inspector then ask Bernard to do?

4   How did this experience change him?

1   The ticket inspector radioed Peterborough station and asked them to make the train to Leeds wait for Bernard.

2   He was incredibly grateful. He wanted to give the ticket inspector everything he had.

3   He asked Bernard to help the next person he sees who’s in trouble, and to tell them to do the same to someone else.

4   It changed him from a young man who was nearly a criminal into a good human being.

The ticket inspector touched my arm. “Listen,” he said, “when we get to Peterborough station, run as fast as you can to platform 1. The Leeds train will be there.”

I looked at him, without really understanding what he had said. “What do you mean?” I said. “Is the train late or something?” “No, it’s not late,” the ticket inspector said. “I’ve just radioed Peterborough station. The train is going to wait for you. As soon as you get on, it’ll leave. The passengers will complain, but let’s not worry about that.

You’ll get home, and that’s the main thing.” And he walked away.

I suddenly realized what an amazing thing he had done. I got up and went after him. I wanted to give him everything I had, all the money in my wallet – but I knew he would be offended. I grabbed his arm.

“I wish I had a way to say thank you,” I said. “I really appreciate what you’ve done.”

“No problem,” he said again. “Listen, if you want to thank me, the next time you see someone in trouble, help them. That will pay me back. And tell them to do the same to someone else. It’ll make the world a better place.”

When the train stopped, I rushed to platform 1 and, sure enough, the Leeds train was there, waiting, and a few hours later I was with my mum in hospital.

Even now, years later, whenever I think of her, I remember the Good Ticket Inspector on that late-night train to Peterborough. It changed me from a young man who was nearly a criminal into a decent human being. I’ve been trying to pay him back ever since then.

C. Listen to three people who called in with their stories about being helped by strangers. Which one(s) happened when the people were traveling? 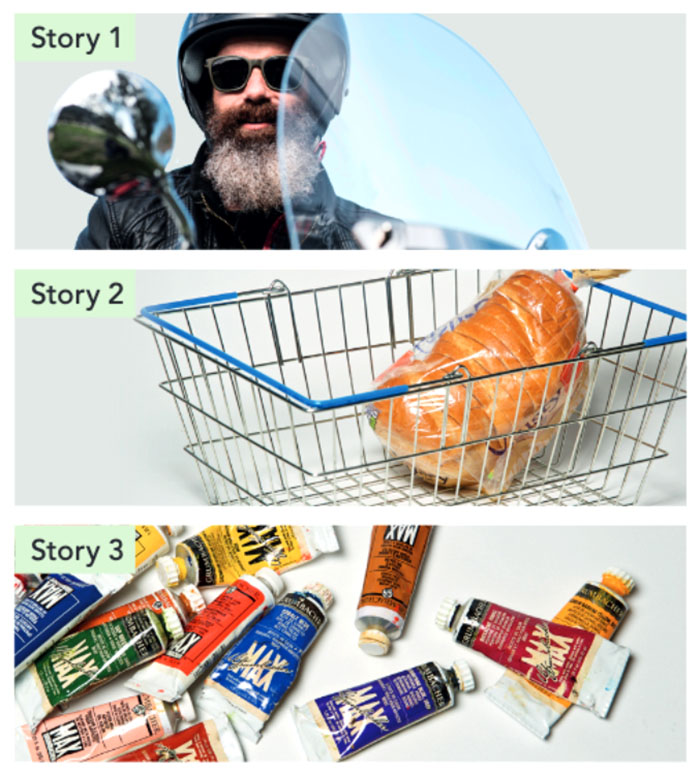 D. Listen again and match three sentences to each story.

___ A   The problem happened at airport security.

___ B   The problem happened when the speaker was shopping for food.

___ C   The speaker had forgotten an important rule.

___ D   The speaker was traveling with his / her family when something happened.

___ E   The speaker didn’t have enough money to pay for something.

___ F   The speaker lost something that was really important for him / her.

___ G   A week later, the man returned the items that had been taken away.

When I was seven, my family were on holiday in the USA, and one day we drove to the Grand Canyon. The car window was open, and at one point, my favourite blanket flew out the window and was gone. I was devastated. It was my security blanket and I couldn’t sleep without it. Soon after, we stopped for petrol at a service station. I was sitting in the car, feeling miserable, eating a sandwich, when a biker gang – you know, a group of guys on motorbikes in leather jackets – drove into the petrol station. A huge, frightening man with a grey-and black beard got off his bike and came to the car. He knocked on the window and then pulled my blanket from his jacket pocket and handed it to my mum. He then went back to his motorbike. I was so happy I ran up to him and gave him my sandwich.

This happened about twenty years ago, but the memory is still really vivid. I was recently married, my wife was pregnant, and we had very little money because I only had a part-time job. It was a few days before payday and I went to a food store to get only what we absolutely needed. In all, I bought about ten dollars’ worth of stuff. At the checkout, I swiped my debit card. The cashier said, ‘Sorry. It says Declined. Try again.’ I asked her to take one item out of the basket, and then I swiped again. There was now a line of customers behind me. The cashier said, ‘Sorry. Declined again.’ I went on taking things out until the only thing I had left was a loaf of bread, and then the card was accepted. I took my bread and left – I was feeling absolutely humiliated. A few seconds later, I heard the voice of a little girl behind me, a girl who was standing with her mother right behind me in the line. She gave me a grocery bag full of all the things I’d put back. Her mother had bought them for me. I still cry when I remember that moment and think how such a small act can mean so much for a person in need.

I’m a painter, and a couple of years ago I was travelling by plane to see friends, and I’d taken my painting things with me. I forgot about the rules about not being able to take liquids in carry-on luggage, so when I got to security at the airport, the man took away all my paints. I was really angry with myself for being so stupid. But when I came back a week later, the security man was there at the baggage reclaim area with my paints. Not only had he kept them for me, but he’d also looked up the date and time of my return flight so that he could be there to meet me.