Practice English Listening B1+ Exercises – Why did they call you that?

A. Listen to four people talking about their name. For each person, write their name and tick (✓) if they are happy with it.

B. Listen again and answer the questions for each person.

1   Why did their parents choose that name for them?

1   He was named after Sean Connery.

2   At school he was nicknamed ‘Gibbo’ because of his surname, Gibson.

1   She was named after a hospital in New Jersey.

2   No, but people call her Debbie or Deb for short.

1   His mum called him after a place – a monastery in Nepal. It was also the name of the lama / head priest there.

3   He wouldn’t like to change his name because it’s unique and he’s proud of it.

1   Because her dad is half Polish and her parents wanted a Polish name.

I   Excuse me. I’m doing a survey. Can I ask you some questions about your name?

S   I think I’m named after the actor Sean Connery, who played James Bond in the sixties. He was still very famous at the time when I was born.

S   Yes, at school they used to call me ‘Gibbo’ because of my surname, Gibson. I didn’t really mind it because most people were called by some nickname or other.

I   And are you happy with your first name?

S   Mmm, I like it. I was usually the only Sean at school, which I think was quite a good thing. But people find it quite difficult to spell, especially as there are two possible spellings, and most foreign people find it really difficult to pronounce.

S   No, no, I definitely wouldn’t change it.

D   Ah, I’m actually named after the hospital where I was born, Deborah Hospital in New Jersey – near New York. My dad thought of that.

D   No, but everyone calls me Debbie or Deb for short.

D   I don’t know. When I was little, I started calling myself April, and then Caroline, but now I don’t like those names, either.

K   It was my mum’s idea. When she was young, she went travelling in the Himalayas and she stayed at a monastery in Nepal called ‘Khari’ – I think she said it was also the name of the lama.

K   Yeah, the head priest there. You know, like the Dalai Lama. Apparently, Khari means ‘the precious one’.

I   Oh, OK! Thanks – that’s really interesting. Do you have a nickname?

A   Well, my dad’s half Polish, and my parents wanted a Polish name. My mum originally wanted to call me Agnieszka, but my dad thought it would be too hard to spell, so they decided on Anya.

A   Yes, I am – it’s quite an unusual name in the UK. I only know one other Anya. I think it’s more common in Poland, but there it’s spelt A-N-I-A.

A   No, I really like it. I often get compliments about it.

A. Listen to a radio programme about naming and match photos A-H to 1-7. 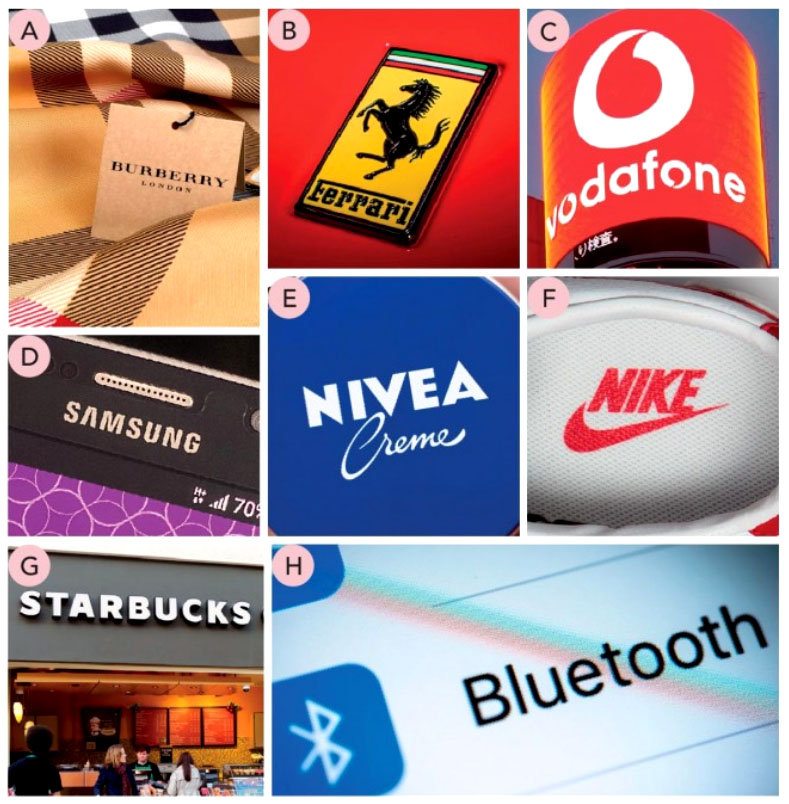 7   ◻ ◻ They are named after the people who started the companies.

1   What two words does the name Microsoft come from?

2   In what year was the name Samsung chosen?

3   What was Nike’s original name?

4   Why did the Starbucks founders want a name beginning St-?

5   What two Viking letters in the Bluetooth symbol made of?

4   Because an advertising agency said they were powerful letters

I   Today we’re talking to the Creative Director of a business that names companies and products. Welcome, John.

I   So, how do companies go about choosing their names?

J   Oh, in all sorts of ways. Many, like Burberry clothes and accessories, and Ferrari cars, are named after the people who started them. Others are combination words, such as Vodafone, which is from letters in the words voice, data, and telephone – though actually, they changed the P-H in telephone to F. And Microsoft comes from the words microcomputer and software.

J   And other names come from phrases in the local language. A good example of that is Samsung, the big Korean electronics company. In Korean, Samsung means ‘three stars’. The name was chosen back in the year nineteen thirty-eight, and at that time, three stars was the most impressive rating that people could imagine for hotels and things like that.

I   So if they’d started the company today, they would probably have called it ‘five stars’ – whatever that is in Korean.

J   Absolutely. Some names even come from Latin – the name of the cosmetics company Nivea comes from the Latin word niveus, which means ‘snow white’. And talking of Latin, there’s another famous brand name with a classical connection, which is Nike.

I   I think I know this one. Nike is the Greek goddess of victory. Is that right?

J   And a name ideally needs to have a strong sound. Take the coffee chain Starbucks, which was founded by two teachers and a writer, who decided to set up a business selling high-quality coffee beans and roasting equipment. Their advertising agency advised them that the letters S-T were powerful, and so they brainstormed words beginning with these letters and thought of a character called Starbuck from a nineteenth-century novel. The name didn’t have anything to do with coffee, but they said that ‘the sound seemed to make sense’.

I   And do you have a favourite brand name?

J   Well, one of my favourites is Bluetooth. This one comes from the name of a Viking king, Harald Blatand, so called because he had a dead tooth which had turned blue – blatand means ‘blue tooth’ in Danish. This king believed in good communication between people, which is an excellent model for developing new communication technologies. But also, the logo for Bluetooth on your phone screen, the B shape, is made up of the two Viking letters for the King’s initials – the symbols for H – Harald – and B – Blatand. I love that.

I   Thank you so much, John, for speaking with us this afternoon.