1. Listen and answer the questions.

2. Listen again, as many times as you want, and draw the symbols (in the box) on the maps. Include the temperature too (e.g. -1°G). 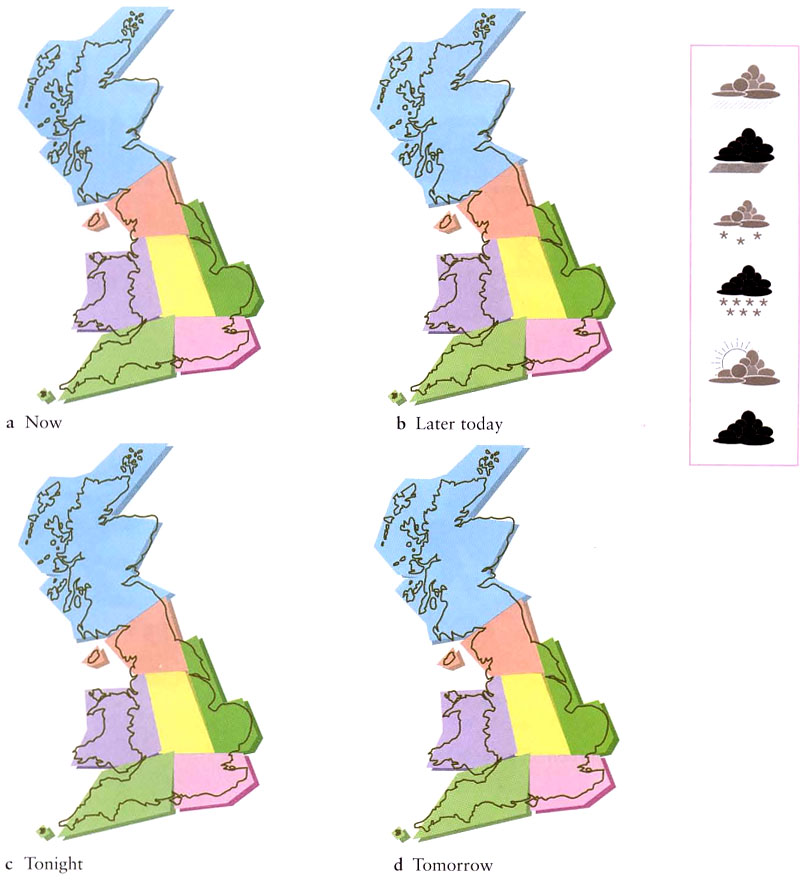 c   the north and Scotland

d   to the Caribbean for a holiday 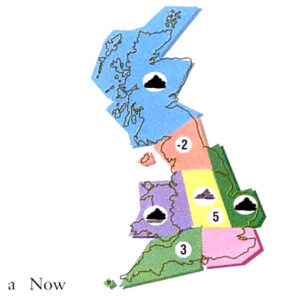 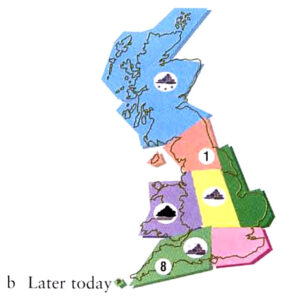 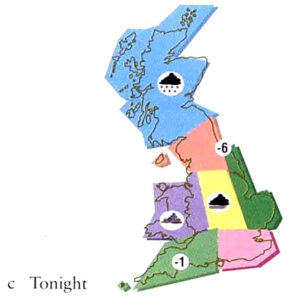 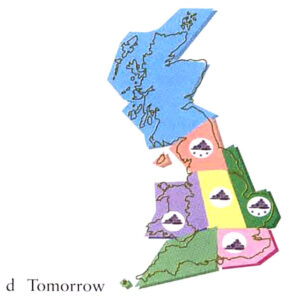 CHARLIE:   And now, at five past eight here on Breakfast Television, it’s time for our weather report from Samantha Sweet. Good morning, Sam.

SAM:   Hello Charlie, and good morning to all of you watching. As usual, everything depends on where you live this morning. Some of you will be luckier than others. We’ve got everything: rain, heavy snowfall, freezing conditions, but sunshine too. Right, so let’s start with the south-west of the country. As you can see from the chart, it’s started quite cold – about 3 degrees centigrade – but it’ll warm up as the day goes on, reaching about eight degrees by the afternoon. It’s going to be cloudy with sunny periods, I think, but it’s going to be a cold night, though, down below freezing – about minus 1, I should think. So he warned!

In the south-east, things are much the same, though not quite as warm as in the south-west. But I don’t expect temperatures to fall below freezing tonight. That’s because of a warmer breeze coming in from the Channel.

In the middle of the country, things are a bit more confused. Right now it’s about 5 degrees centigrade, cloudy, and with some light rain. But that situation is going to change as the day goes on, and by the end of the day it will probably be raining quite heavily and the rain will continue through the night, only easing up tomorrow morning. But don’t expect much dry weather in the next few days.

Things aren’t quite so bad in Wales and the west. Here the rain will gradually die away in the late afternoon, so people can expect quite a dry night, though tomorrow looks like being a day of scattered showers.

Up the cast coast of the country, in the north, and further north into Scotland it’s pretty cold already, as anyone there knows. It’s about minus 2 degrees centigrade, with heavy cloud, but that should go up to about 1 degree during the morning. But the outlook doesn’t look good. Expect some snow by midday, starting quite light, but gradually increasing so that by the evening it will be heavy, with blizzard-like conditions on the road, so do be careful. In fact the police have just issued advice to motorists not to travel at all unless their journey is absolutely necessary. Temperatures tonight will drop to about minus 6 degrees.

And what of tomorrow? As I said. in the middle of the country, it’s going to be wet and cloudy, scattered showers with the occasional burst of heavier rainfall. In the north and east, people should settle in for a cold spell with more snowfall over the next few days. Not quite so bad in the south and west, though. Here there will be some sunshine – when it isn’t raining, that is.

And that’s the end of this morning’s forecast. Charlie?

CHARLIE:   Thanks, Sam. By the way, you won’t be worried about the weather for the next few days, will you?

SAM:   No. Charlie, I won’t. I’m off on holiday to the sunny Caribbean this afternoon for ten days.

CHARLIE:   Well have a nice time, Sam, we’ll miss you. And now back to our main news story this morning. The prime minister has announced …