Practice English Listening B1 Exercises – Race to the sun

A. Listen to Martin talking about his journey from London to Avignon by car. Number the pictures 1-7. 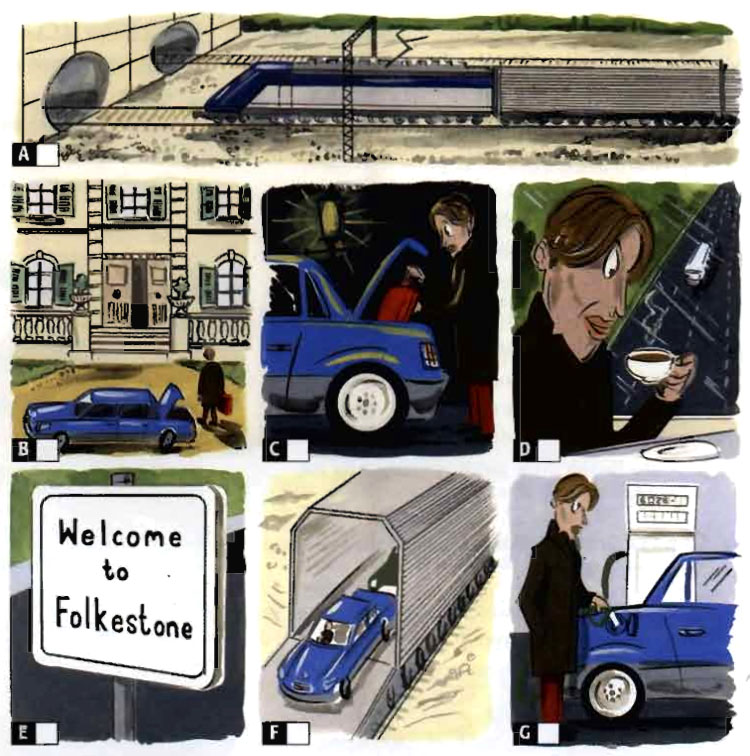 1   There’s a lot of traffic in London on Saturday mornings.

2   Petrol is more expensive in Britain than in France.

3   There are two ways to cross the English Channel by car.

4   You can’t drive through the Channel Tunnel.

5   The journey through the tunnel takes an hour.

6   Drivers must sit in their car when they go through the tunnel.

1 F (There was no rush hour traffic.)

I set off at six. It was still dark when I put my suitcase in the car and drove off. I had a good journey through London because it was Saturday so there was no rush hour traffic. Soon I was on the M20 motorway heading towards Folkestone on the south coast. I stopped at a service station for a cup of coffee and a sandwich. I didn’t buy any petrol because it’s much cheaper in France. I arrived in Folkestone at 8.10. The problem with travelling by car from England to France is that Britain is an island. There are 35 kilometres of water between England and France. You can get across it by ferry, but there’s much better and quicker way – the Channel Tunnel!

The Channel Tunnel’s only a train tunnel, not a road tunnel and so you have to put your car on a train. The journey takes an hour and a half, and drivers have to sit in their cars because there are no seats on the train for passengers. I arrived at the terminal and joined the queue of cars waiting for the next train.

At 10.30 the train arrived in Calais and I drove my car off the train and onto the road – a French road. I had to remember to drive on the right, not on the left!

The traffic in Calais was quite bad. Finally I got out of Calais and onto the motorway to the South of France. The speed limit on French motorways is 130 kilometres an hour and the road was clear so now I could travel quickly. But first I stopped at a service station to fill up with petrol.

Petrol’s cheaper in France than in Britain but, on the other hand, you have to pay to travel on French motorways. In Britain they’re free.

It’s 960 kilometres from Calais to Avignon, and the journey on the motorway was boring. I listened to my favourite music to pass the time and I stopped again for lunch. At eight o’clock I finally arrived in Avignon. I found my hotel and I was looking forward to a lovely French meal.

C. Listen to Martin talking about his journey and fill in the By car column in the chart.

At eight o’clock I finally arrived in Avignon. I found my hotel and I was looking forward to a lovely French meal. It took me 14 hours to get there, and cost a total of £200. I gave the journey ten out of ten for convenience but only six for comfort. I was exhausted.

A. Now listen to a road safety expert talking about the tests. Number the activities 1-6.

Which of these things is the most dangerous when you’re driving a car?

___ making a call on your mobile

___ listening to your favourite music

___ listening to music you don’t know

___ opening a packet of crisps or a can of drink

___ picking up a specific CD from the passenger seat

___ talking to other passengers

1   What should you do when you are driving?

2   Why is opening a packet of crisps or a can so dangerous?

3   What do people often do when they pick up a CD?

4   What gets worse when drivers are talking on the phone?

5   How do people drive when they are listening to their favourite music?

6   What happens if the music is fast and heavy?

7   What’s the main problem when drivers talk to other passengers?

8   Why is listening to music you don’t know the least dangerous?

1   Opening a packet of crisps or a can of drink.

2   Picking up a specific CD from the passenger seat.

4   Listening to your favourite music.

5   Talking to other passengers.

6   Listening to music you don’t know.

2   Because you need both hands to do it (and you take your hands off the wheel for a second or two).

3   They take their eyes off the road for one or two seconds.

7   They don’t pay (enough) attention to what is happening on the road.

8   Because it doesn’t distract you as much.

T   And this evening on Behind the wheel we talk to Brian Delaney, who’s an expert on road safety. Brian, you did some tests to find out how dangerous it is to do other things when we’re driving. According to your tests, what’s the most dangerous thing to do?

E   Well, the first thing I have to say is that doing any other things when you’re driving is dangerous and can cause an accident. Because when you’re driving you should concentrate 100% on controlling the car and anything else you do is a distraction.

The tests we did in a simulator showed that the most difficult and most dangerous thing is to try and open a packet of crisps or to open a can of drink. The reason is that most people actually need two hands to open a packet of crisps or a can of drink so they take both hands off the wheel for a second or two. And, of course, that’s the most dangerous thing you can possibly do. In fact, one of the drivers in the simulator actually crashed when he did this.

T   And which is the next most dangerous?

E   The next most dangerous thing is to select a specific CD from the passenger seat. This is extremely dangerous too because to do this you have to take your eyes off the road for one or two seconds.

E   Number three was making a phone call on a mobile. What we found in the tests was that drivers drove more slowly when they did this, but that their control of the car got worse.

E   Number four was listening to our favourite music. In the tests most drivers drove more quickly and less safely when they were listening to music they already knew. If the music was fast and heavy, some drivers even drove more aggressively.

T   So no heavy metal when you’re driving.

T   So the least dangerous is listening to music you don’t know.

E   That’s right. The least dangerous of all these activities is listening to unfamiliar music on the radio or on a CD player. It seems that if we don’t know the music then we’re less distracted by it. In this part of the tests, all drivers drove safely and well.