A. Listen to three conversations between different family members. Match them to cartoons A-C. What are the people talking about? 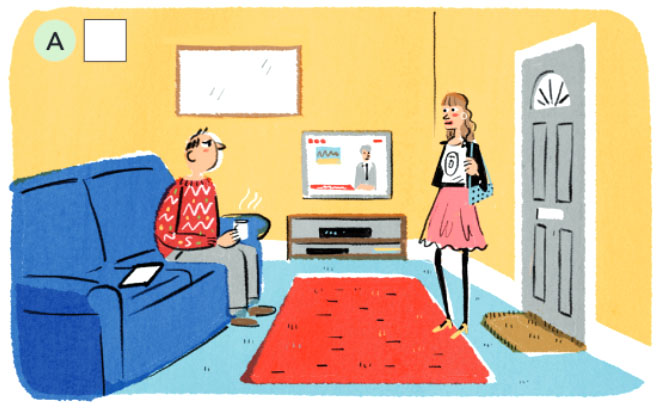 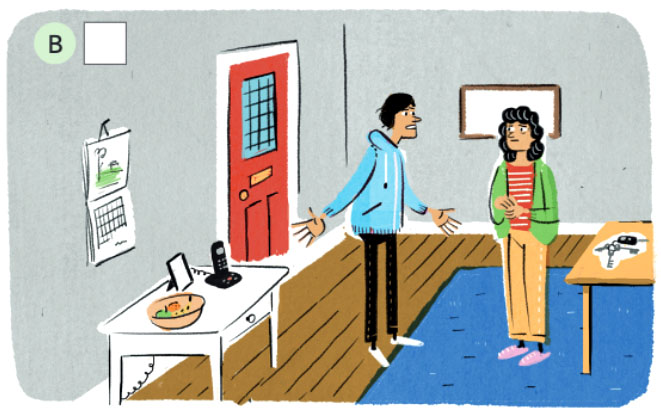 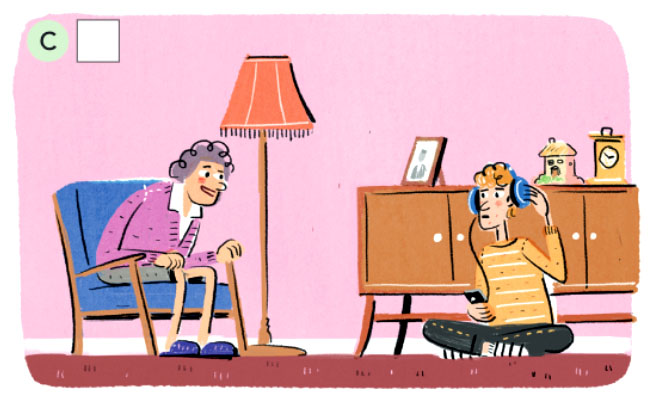 B. Listen again and complete two sentences from each conversation.

A 2;   They’re talking about a party that she’s going to.

B 3;   They’re talking about if he can borrow her car.

C 1;   They’re talking about what he’s going to do next year.

A   I said, ‘Are you going to go to university next year?’

B   No, Gran. I’ve already told you loads of times. I’m not going to go to university. I’m going to look for a job. I need to earn some money.

A   All right, dear, you don’t need to shout. I can hear perfectly well, thank you. What’s the time now?

B   Bye. Hey, what do you mean tomorrow? Aren’t you coming back tonight?

A   No, I told you about it yesterday. I’m going to a party at Katie’s. I’m staying the night there.

A   Oh, just the usual crowd. You don’t know any of them.

B   Well, make sure you don’t go to bed too late. And don’t forget to…

B   Where’s your coat? You can’t go out like that. It’s going to be cold tonight!

A   Can I use your car tonight?

B   Because you won’t look after it. You’ll drive too fast.

A   I won’t. I promise I’ll drive really slowly. I’ll be really careful.

You’re going to hear two people talking about a time when they or one of their siblings behaved badly. Listen and answer the questions for James and Marilyn. Who do you think behaved worse, James or Marilyn’s sister?

3   What bad thing did they or their sibling do?

5   How do James’s brother and Marilyn show that they’ve never forgotten what happened?

3   James accidentally stabbed his brother in the finger with a penknife.

4   Their mother was very angry with James, but it was a very small cut.

5   James’s brother still tells other people about when James stabbed him.

3   Her sister hid her parrot in a cupboard. Marilyn and her parents looked for it everywhere and she was very upset.

4   Her sister showed them where the parrot was, in the cupboard.

5   Marilyn sometimes hides her sister’s things to remind her of the parrot incident.

Well, I can remember one terrible thing I did to my brother when we were teenagers – I have a twin brother. Um, so we used to fight and argue a lot, as…as kids and teenagers. And one time, when we were about fifteen, we were fighting, arguing – we shared a bedroom, so we were in our room, um, fighting each other, and I accidentally stabbed him in the finger with a penknife that I was holding in my hand. And it was…it was a total accident, and I was holding it and I was kind of threatening him, but I didn’t really mean to…to stab him, obviously, um, but I did, and I was absolutely horrified at what I’d done. And of course, he – my brother – he looked down at his finger, with this blood coming out from where I’d stabbed him, and he looked up at me, and he said, ‘I’m going to tell Mum!’, which sort of made me laugh because, you know, we were both fifteen at the time, and it was a very childish thing to say. And he ran downstairs to tell our mum, and I was absolutely terrified that she was going to be really angry with me. Which she was, of course. But, um, he was fine, by the way – it was a very small cut. He didn’t have to go to hospital or anything; it was absolutely fine, but, um, he still now – and this is, you know, we’re in our late forties now, so this is thirty years ago – but he still sometimes tells people, when we meet them, about when I stabbed him. But yeah, it wasn’t a very nice thing to do to him!

Well, my sister was four years older than me. She still is, actually. Um, I remember once when I was about ten years old, I had a pet, a bird. Um, it was a small green parrot called Charlie, and I really loved him. He lived in a cage, but I sometimes let him out to fly around the house, you know, so, so he could have some freedom. And one day, I was in my bedroom and I let him out, but then something happened – I can’t remember what – and I forgot about him for a, for a while, and then suddenly I couldn’t see him anymore. And, well, I looked everywhere for him – I looked all over the house and I couldn’t find him anywhere. Oh, I cried and I cried because I was sure that he had flown out of the window. And my parents started to help me because they felt awful about it as well. And just when I was completely hysterical, my sister admitted that, in reality, she had hidden him: she had shut him inside a cupboard – can you believe? Well, she opened the cupboard and poor Charlie was there; he was so frightened, but we were all really relieved to find him. My sister was so horrible that day. Of course, now we get on really well, but I still remember what she did to poor Charlie, and sometimes when she comes to see me, I hide her car keys or her purse or something just to remind her of it. Is that bad?