A. Listen to Rumiko answering questions 2-6 from the interviews. Do you think food for her is fuel or pleasure? Why?

1   What does she usually have in the morning?

2   Where does she usually have lunch and dinner?

4   Does she eat or drink anything unhealthy?

5   Is she cutting down on anything at the moment? Why (not)?

6   What’s happening to the Japanese diet at the moment?

7   Does she think this is a completely bad thing?

Probably more pleasure, as she likes cooking, enjoys eating out, and likes the variety of food and restaurants.

1   Just a cup of coffee in the office. She doesn’t get up early enough to have breakfast.

2   In sushi restaurants and ones that serve organic food.

3   She works late, her kitchen is too small, and her boyfriend is a better cook than she is.

5   No, she doesn’t need to because she has a healthy diet and does regular exercise.

6   It’s getting worse, more westernized. As a result, people are getting fatter.

7   No, she doesn’t. She likes the fact that there are more different kinds of restaurants and food / more variety when you eat out.

R   I don’t usually have breakfast because I can’t get up early enough to eat! I normally just buy a coffee and drink it in the office.

I usually have lunch in a restaurant near the office with people from work. When I was younger, I used to go to fast food restaurants and the pizza, or fried chicken and chips, but now I prefer eating something healthier, so I go to sushi restaurants or restaurants which serve organic food. And for dinner I eat out a lot too.

R   Well, I like cooking, but I work very late every day and also my kitchen’s too small. My boyfriend’s a better cook anyway.

I    Do you ever eat unhealthy food?

R   Well, I don’t eat a lot of sweet things but I drink a lot of coffee every day. I think I’m addicted to caffeine.

I    Are you trying to cut down on anything at the moment?

R   No. I eat healthily and I do exercise regularly, so I don’t think I need to cut down on food.

I    Are people’s diets in your country getting better or worse?

R   Oh, probably worse. I think the diet in Japan today is much more westernized than before and that’s why some people are getting fatter. But personally, I like the fact that there are more different kinds of food and restaurants now. I enjoy the variety, it makes eating out much more fun.

A. Kevin Poulter, and English chef, has just opened a restaurant in Santiago, the capital of Chile. Listen to an interview with him and number the photos 1-5 in the order he mentions them. 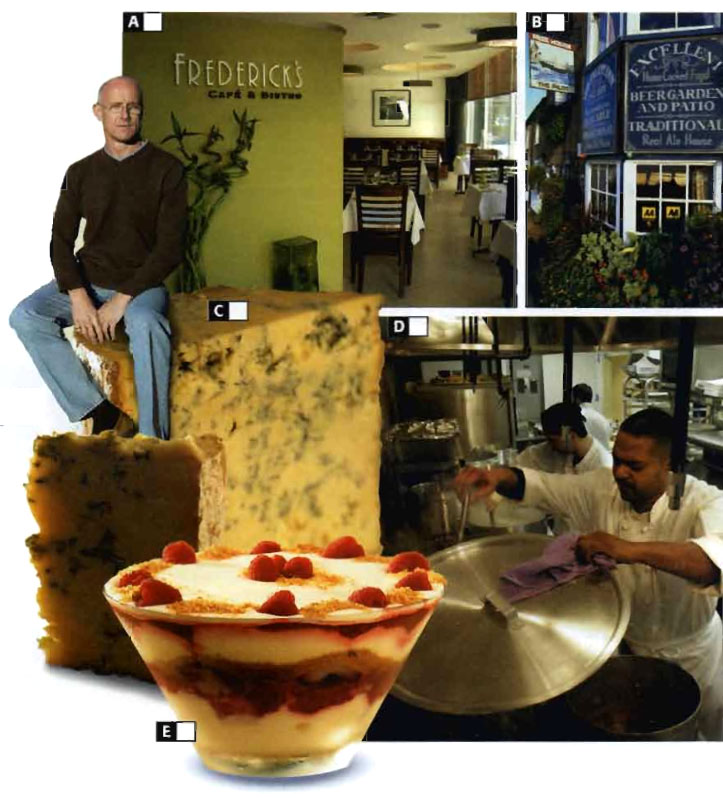 1   Why did he decide to open a restaurant in Chile?

3   Why were Chilean people surprised when he opened his restaurant?

4   What English dishes does he serve in his restaurant? Are they popular?

5   Where does he recommend tourists eat in England? Why?

6   How many women work in his kitchen? Why does he think there are so few women in restaurant kitchens?

7   What English food does he miss most?

2   E a trifle (typical English dessert, made with fruit, cake and cream)

4   D a restaurant kitchen (with only men working there)

1   Because he liked the country, and Chileans are pro-European and open to new things.

2   Frederick is his father’s name.

3   Because they don’t expect the English to be good cooks.

4   English breakfasts and desserts, e.g. trifle, English teas with cakes and sandwiches. They are all very popular.

5   In gastropubs (pubs which are also restaurants) because they serve food which is good but not too expensive.

I    Kevin, why did you decide to open a restaurant in Chile?

K   I’d always wanted to have my own restaurant and it would have been very expensive to do that in England. I’d visited Chile as a tourist and loved it, and I thought it would be a good place because Chileans are very pro-European, and are quite open to new things, new ideas. So I opened Frederick’s.

I    Right. Why did you call the restaurant Frederick’s?

K   Because Frederick’s my father’s name. It’s my second name too.

K   Mainly international dishes like pasta, steak and fries, risotto – but we also do several English dishes as well.

I    Were Chilean people surprised when they heard that an English chef was going to open a restaurant here?

K   Yes, they were – very! I think people don’t usually expect the English to be good cooks.

K   No, he’s Chilean – but I’ve taught him to make some English dishes.

I    What kind of English dishes do you have on your menu?

K   Well, we’re open in the morning, and we serve traditional English breakfasts, and then we have a lot of English desserts at lunchtime, for example trifle – that’s a typical English dessert make with fruit and cake and cream. And we do proper English teas in the afternoon – tea with cakes or sandwiches.

I    Are the English dishes popular?

K   Yes, especially the desserts and cakes. I think people here in Chile have a very sweet tooth.

I    People who visit England always say that the food isn’t very good, or that you have to spend a lot of money to eat well. Do you agree?

K   I think eating good food’s never cheap. But I think that today, the best place for a tourist to eat in England is in a pub, especially the ones called gastropubs – pubs which are also restaurants. There pubs are beginning to serve really good food that’s not too expensive.

I    I see. You said earlier that your chef was a man. Do you have any women working in your kitchen?

K   Yes, one, but the rest are all men. In fact, I think that’s typical all over the world – there are far more men than women in restaurant kitchens.

K   I think there are a lot of reasons. The most important reason is probably the unsocial hours. Most women don’t want a job where you have to work until late at night. Then there’s the atmosphere. Women don’t like being shouted at, and there’s a lot of shouting in restaurant kitchens. It’s also usually incredibly hot and I think women don’t like that either.

I    And finally is there any English food that you really miss here?

K   The thing I miss most living in Chile is English cheese. I really miss Stilton – which is a wonderful English blue cheese. It’s not as famous as some of the French cheeses like Roquefort but I think it should be. You should try it!