Practice English Listening B1 Exercises – Behind the scenes

A. Look at the photos of Dagmara Walkowicz and Spielberg. Where were they and what do you think Dagmara was doing in the black-and-white photo? Listen to Part 1 of an interview with Dagmara and check. 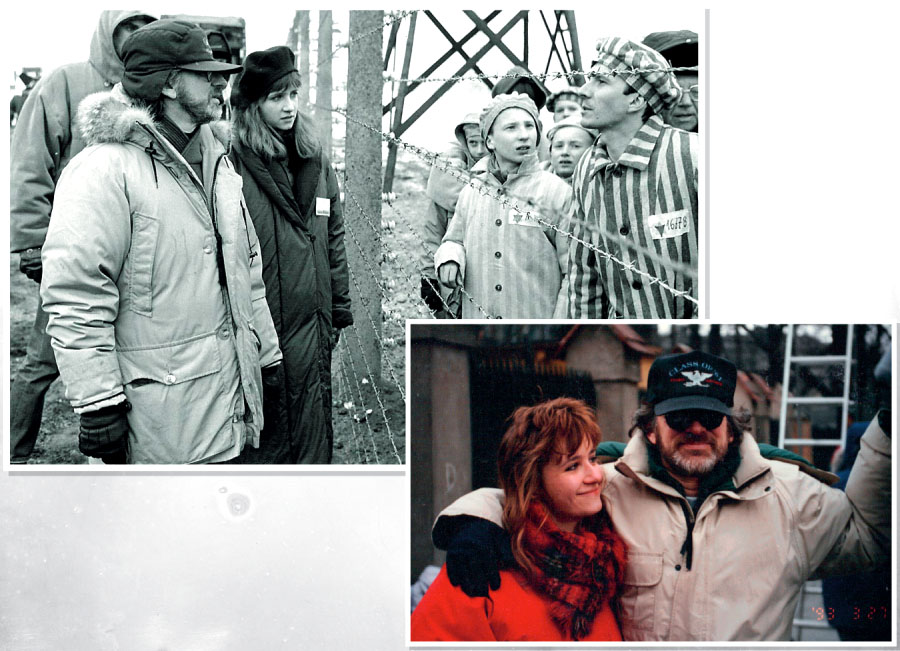 B. Listen again and mark the sentences T (true) or F (false). Correct the F sentences.

1   When the film company came to Krakow, Dagmara was working as a teacher.

2   She got a job doing translations for them.

3   There was a party at the hotel to celebrate Spielberg’s birthday.

5   Dagmara was very nervous, so she drank a bottle of champagne to give herself courage.

6   Spielberg was very pleased with the way she did her job.

They were on the set of Schindler’s List. Dagmara was interpreting for Spielberg.

I   So tell me, how did you get involved in the film, Dagmara?

D   Well, as you probably know, Schindler’s List was shot in Krakow, in Poland, which is where I live. I was a university student at the time, studying English. And the film company set up their production office here three months before they started shooting the film, and I got a job there as a production assistant, preparing and translating documents and the script.

I   But how did you get the job as Steven Spielberg’s interpreter?

D   It was a complete coincidence. Just before the shooting started, there was a big party in one of the hotels in Krakow for all the actors and the film crew, and I was invited, too. When I arrived at the party, the Polish producer of the film came up to me and said, ‘The woman who was going to interpret for Steven Spielberg can’t come, so we need you to interpret his opening speech.’

I   How did you feel about that?

D   I couldn’t believe it! I was just a student – I had no experience of interpreting – and now I was going to speak in front of hundreds of people. I was so nervous that I drank a couple glasses of champagne to give myself courage. I must have done a pretty good job, though, because soon afterwards Spielberg came up to me to say thank you, and then he said, ‘I’d like you to be my interpreter for the whole film.’ I was so stunned I had to pinch myself to believe that this was happening to me.

C. You’re now going to listen to the whole of Part 2. Read the questions. Then listen and write down some of the key words.

1   How many times were some scenes repeated? How did that make Dagmara feel?

2   Why did Spielberg start shouting at her? What happened after that?

3   In general, how did Spielberg treat her? What example does she give?

4   What scenes was she going to appear in as an extra? Why did she not appear in the final version of the film?

5   Did she ever work with Spielberg again?

6   What offer did Spielberg make to Dagmara? Does she regret not accepting it?

D. Answer the questions in C. Use your key words.

6   work, production assistant, next movie, Hollywood; not at all

1   Some scenes were repeated 16 times. It made Dagmara think it was her fault and it made her nervous.

2   He was stressed. He apologized; she cried a little; all was right again.

3   He was demanding; he was really nice, he treated her like a daughter; it was freezing on set; he made sure she had a warm coat and gloves.

4   Two party scenes; one scene didn’t make the final cut, and before the other scene, she tripped, twisted her ankle, and was in pain.

5   Yes, she interpreted at the premiere of Schindler’s List in Poland.

6   He offered her work as his production assistant for his next movie in Hollywood. No, not at all

I   So what exactly did you have to do?

D   I had to go to the film set every day and translate Spielberg’s instructions to the Polish actors, and also to the extras. I had to make them understand what he wanted them to do. It was really exciting, and I often felt as if I was a director myself.

I   So was it a difficult job?

D   Sometimes it was really hard. The worst thing was when we had to shoot a scene again and again because Spielberg thought it wasn’t exactly right. Some scenes were repeated as many as sixteen times – and then sometimes I would think that maybe it was my fault – that I hadn’t translated properly what he wanted, so I’d get really nervous. I remember one scene with lots of actors in it which we just couldn’t get right, and Spielberg started shouting at me because he was stressed. Eventually we got it right, and then he apologized and I cried a little, because I was also very stressed – and after that, it was all right again.

I   So, was Spielberg difficult to work with?

D   Not at all. I mean, he was very demanding – I had to do my best every day – but he was really nice to me. I felt he treated me like a daughter. For instance, he was always making sure that I wasn’t cold – it was freezing on the set most of the time – and he would make sure that I had a warm coat and gloves and things.

D   Yes, twice! I was going to be in two party scenes, and I got to wear beautiful long dresses and high heels. Unfortunately, one scene didn’t make it to the final cut of the film, and before we started shooting the other one, I tripped walking down some stairs and twisted my ankle really badly. I was in so much pain that I couldn’t take part in the filming. And that was the end of my ‘acting career’. I still have the photos of me looking like a girl from the forties, though!

I   Have you ever worked with Spielberg again?

D   Yes. A year later he invited me to interpret for him again, this time during the premiere of Schindler’s List in Poland, which was broadcast live on national television! Before that, he had also asked me to come to work as a production assistant on his next movie in Hollywood. I was very tempted and thought really hard about it, but I hadn’t finished my studies yet, and all my family and friends were in Poland – so in the end, I decided not to go.

D   Not at all. I had my moment, and it was unforgettable, but that was it!