Practice English Listening B1 Exercises – And the murderer is …

A. Listen to Part 1 of an interview with a retired police detective, who is an expert on Jack the Ripper. Who is Jan Bondeson’s suspect? Write 1 in the box and complete his occupation. 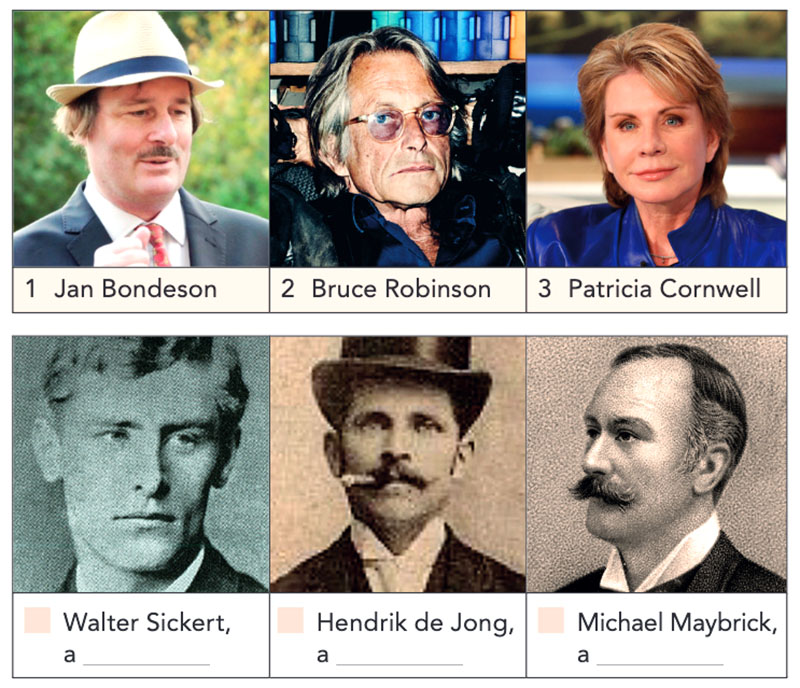 B. Listen again and make notes about Jan Bondeson’s theory in the chart.

what evidence there is   He had a history of violence against women, was in London when the murders took place, and he matches the descriptions of Jack the Ripper.

I   Good morning, and thank you for coming, Mr Morton – or should it be Inspector Morton? You were a detective with Scotland Yard, weren’t you?

M   Yes, that’s right. For twenty-five years. I retired last year. I People today are still fascinated by the identity of Jack the Ripper, over one hundred and thirty years after the crimes were committed. It’s incredible, isn’t it?

M   Well, it’s not really that surprising. People are always interested in unsolved murders – and Jack the Ripper has become a sort of cult horror figure.

I   So what can you tell us about some of the new theories about his identity?

M   Well, a recent new theory was put forward by a crime historian called Jan Bondeson. He thinks that Jack the Ripper was a Dutch sailor called Hendrik de Jong.

I   What evidence does he have?

M   Well, de Jong was definitely a murderer. He killed four women in Holland and Belgium, including two of his ex-wives. He also travelled to London a lot, and he was there when the Jack the Ripper murders took place. He also matches the descriptions we have of Jack the Ripper.

I   How credible is his theory?

M   Well, even Dr Bondeson says that it’s impossible to know for certain if de Jong was Jack the Ripper. I would say it’s possible, but there isn’t really enough conclusive evidence.

2   Michael Maybrick, a musician (a singer and a composer)

what evidence there is   The Ripper’s letters are similar in style to some of his songs. The letters were posted from different parts of the UK, and Maybrick was on tour at the time.

what Detective Morton thinks   He doesn’t believe this theory.

I   The next recent theory I’m interested in comes from the film director Bruce Robinson, who wrote a book in twenty sixteen called They All Love Jack. What can you tell us about it?

M   Bruce Robinson is convinced that Jack the Ripper was in fact Michael Maybrick, the brother of one of the original suspects, James Maybrick. He thinks that the style of the murders indicates that there was a connection with the Freemasons – which both brothers were.

I   What did Michael do?

M   He was a popular singer and composer of songs at the time, and Robinson thinks that the Ripper’s letters are similar in style to some of his songs, and the fact that they were posted from so many different parts of the UK makes sense because Michael was on tour at the time. Robinson thinks he was a psychopath and was responsible for at least sixteen more murders that took place in England later. He even thinks that Michael went on to murder his brother James.

I   But he was never arrested, was he?

M   No, he wasn’t. However, Bruce thinks that by eighteen ninety-three the police had begun to suspect him, but because many of the police themselves were Freemasons, they allowed him to escape to the Isle of Wight, where he lived for the rest of his life.

M   I think the book is well researched, but I don’t really believe his conspiracy theory that the police knew it was Michael and let him get away. I think the reason the Ripper was never caught was because the police were incompetent, not corrupt.

what evidence there is   An analysis suggests that DNA from his paintings matches DNA from Jack the Ripper’s letters. Letters written by both men are on the same unusual paper. Sickert’s paintings are violent and frightening.

what Detective Morton thinks   He thinks this theory might be correct, but he doesn’t know for sure.

I   Finally, let’s talk about Patricia Cornwell’s research. In her two thousand and two book Jack the Ripper – Case Closed, she said that she had identified the murderer and that she was convinced that Jack the Ripper was in fact Walter Sickert, the painter. What evidence did she put forward to support this claim?

M   Well, she mainly used DNA analysis. She actually spent over two million pounds buying thirty-two paintings by Sickert. She cut up one of them to get the DNA from it – people in the art world were furious.

M   And then she compared the DNA from the painting with DNA taken from the letters that Jack the Ripper sent to the police. Patricia Cornwell said that she was ninety-nine per cent certain that Walter Sickert was Jack the Ripper.

I   And now she’s written a new book with more evidence.

M   Yes, it’s called Ripper: the Secret Life of Walter Sickert. She says she’s found new evidence, including letters which were written by Jack the Ripper and by Walter Sickert on the same very unusual type of paper. She also points out that some of his paintings are very violent and frightening.

M   Well, I think she might be right. She has a lot of evidence, although I don’t think it’s completely reliable. And a lot of people think she’s wrong!

I   So, who do you think the murderer was?

I   Do you think we’ll ever solve the mystery?

M   Yes, I think one day the mystery will be solved. Some new evidence will appear that proves one hundred per cent who Jack the Ripper was, and we’ll be able to say that the case is finally closed. But at the moment, it’s still a mystery, and people like a good mystery.