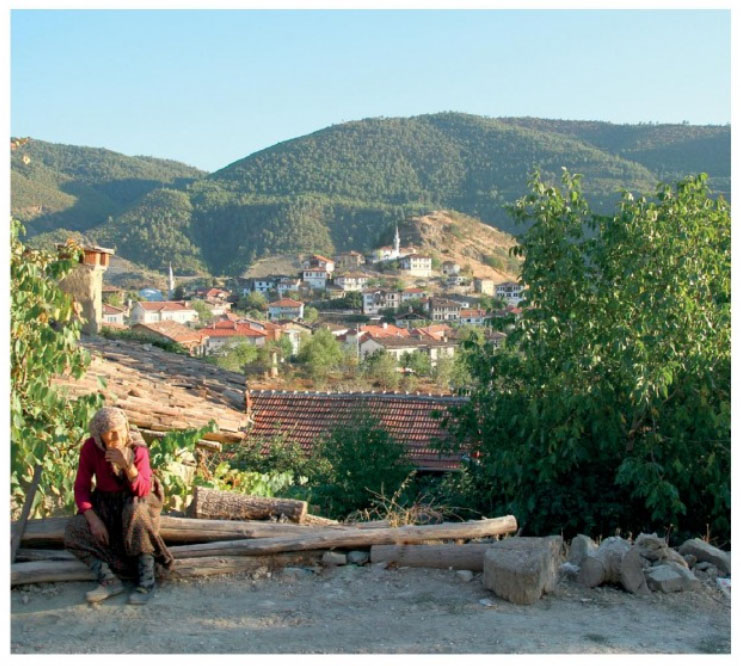 Listen to a woman talking about her life there. Check your answers.

1   What did she like about the village when she lived there?

4   What does she miss about life in the village?

The photo shows a village in Turkey.

1   It was very beautiful; the coast wasn’t far away.

2   There was no running water or electricity, and only one shop. There wasn’t much choice of things to do and buy.

4   The fresh food, fresh fish, the peace and quiet

I used to live in a village in the province of Sakarya. It was an amazing place to live – just so beautiful. There’s a large lake nearby and the hills are covered with pine trees – people go to picnic there. The coast is also not far away. When I lived there, it was as if time had stood still. People worked in the fields. Some things were annoying…there was no running water or electricity – we had our own well and generator – and there was only one shop. We had to wait for a minibus from the nearest town to bring fresh bread and the newspapers every morning! I worked in a school in a nearby town – in fact, the one that sent the bread and papers. I used to think, when I was living there, that there wasn’t much choice of things to do, things to buy, but I made my own entertainment – I played tennis, went for walks, played the piano. In the end, I had to move for work, to Istanbul, which is the biggest and noisiest city in Turkey, and now I really miss the fresh food and fresh fish, the peace and quiet.

A. Now listen to Liz and Bob talking about their experiences. Who stayed, and who moved back to the city?

1   had problems with the house when he / she moved in

2   found prices much higher in the country

7   had problems with the weather

8   gave work to the local people

Bob stayed, and Liz moved back to London.

When I moved in, the house was cold and absolutely filthy, and the cooker didn’t work. I discovered everything in the countryside is more expensive: you have to drive miles to find a shop, where everything costs twice as much as in my local supermarket in London. Local restaurants are really expensive, and if you tell the waiter that you’re a vegetarian, they look at you as if you were from Mars. I never fitted in. I think that in the country, if you’re a woman, you’ll never be accepted unless you’re a full-time mum. Another thing I hated was the shooting! I love animals – I had two horses and two dogs – and I just couldn’t pass a group of men with guns, shooting rabbits and deer, without getting out of my car and saying, ‘Do you really have nothing better to do on a Saturday morning?’ That didn’t make me very popular. I became so lonely I often used to sit in my car and listen to the kind voice of the satnav lady. After five years, I decided to go back to London. I’d learnt that an amazing view and a pair of nesting herons were not enough to make me happy. On my last night in the country, I sat outside underneath millions of stars and I thought to myself, ‘I’ve come to the end of a five-year prison sentence.’ I promised myself I would never, ever go back.

The first thing we had to do was find new jobs. Jean got part-time work with a local company that sells meat products, and I did work as a lawyer. Two years later, we had a barn built, and my wife always wanted to have a donkey or a horse, but in the end we thought sheep were less destructive to the land, so we kept with the sheep, better for the land. So we started with four sheep, which we kept in the garden at first, and then we bought a field, and then we bought ten more sheep and sold six for meat, and that was the start of our sheep business. Now we’ve got sixty-eight sheep and seven fields. At the moment, we’ve got twenty-five sheep that are expecting lambs, ready for the next season. In addition to that, we’ve got free-range hens which we rescued from battery farms. It hasn’t all been easy. Um, it rains a lot where we live now, and um, it gets incredibly muddy, and of course the work with the animals – it can get physically very hard. At first, we had a little bit of resistance – there were some local farmers who didn’t really like newcomers – but we’ve always employed local people and we buy food in the local shops, and we try and engage with the local community as much as we possibly can. We sell our meat and eggs to neighbours and friends, and we produce wool from the sheep as well now. We haven’t really ever considered moving back, because we really enjoy it. We loved life in the city, but we would never think about going back now.