1. Look at these two photos. What do they show? Do you believe the photographs are real?

2. You are going to listen to two stories about UFOs. Read these sentences about each story, and put them in the correct order. Then listen and check your answers.

d   People living on an island began to see strange things in the sky.   ___ 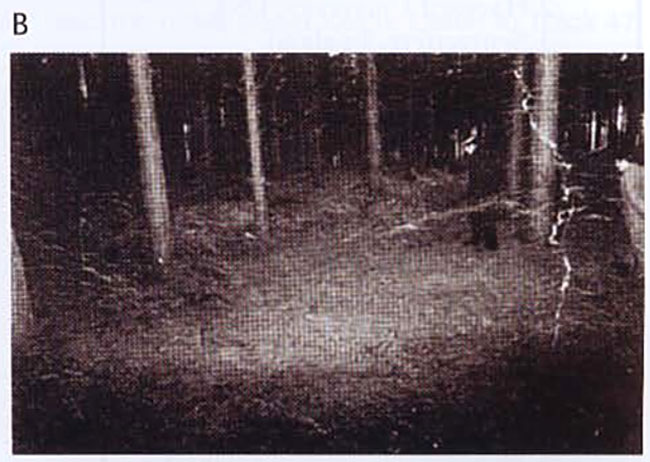 a   They took lights, a radio and a Geiger counter to measure radiation.   ___

b   Security guards saw unusual lights in the forest.   ___

c   The next day there were broken trees and holes in the ground.   ___

e   The lights and radio stopped working, and the Geiger counter started to make noises.   ___

f   On the second night, they went into the forest to investigate.   ___

PRESENTER:   And today on ‘Stranger than Fiction’ we have two stories of Unidentified Flying Objects, or UFOs. The first one comes from Brazil. Listen and make up your own mind.

In 1957 the Brazilian Navy set up a weather station on the small rocky island of Trindade, in the South Atlantic Ocean. In January 1958, people on the island began to see unusual activity in the sky, including discs that were flying very fast. On the night of January 16th, the people who worked on board the Brazilian ship Almirante Saldanha saw the disc you can see in the photograph above. Altogether 47 crew members – people who worked on the ship – saw the disc.

Almiro Barauna, a photographer, was also there and he took a series of six photos. After the ship returned to land, he gave the photos to the Brazilian Navy Ministry. Experts said that the photos were authentic and they said they showed a 50ft diameter object moving at 600 mph.

Since then, there have been two possible explanations for the photographs. Harvard University astronomy professor, Donald H. Menzel said the UFO was an aeroplane flying through fog. Then, later he said that the photos were not real. However, in 1978, an examination by an independent laboratory using digital photo analysis said that the photos were real and that’s what people believe today.

PRESENTER:   The next story comes from England. Listen and make up your own mind!

This happened over the last days of December 1980, near a base of the United States Air Force, which was in Bentwaters, England. For two nights, security guards saw unusual lights in the Rendlesham Forest near the Air Force base. On the second night they went into the forest with lights (because the forest was very dark) and Geiger counters (to see if there was any radiation). They also took 2-way radios to tell people what they were seeing. Suddenly, a 20-ft-wide, 30-ft-tall object appeared, and the Geiger counters started to make noises and the lights and radios stopped working.

The next day there were broken trees and large holes in the ground. At first people said this happened because of the wind. Experts explained the unusual lights using complex scientific reasons. But, they could never explain why the levels of radiation were 25 times higher than normal levels in the earth and trees in the area. The story is still a mystery today and experts can not explain it.