Practice English Listening A2 Exercises – Think before you speak

A. Listen to the conversation between the two women. Who are Jack and Emma? What has happened to them? 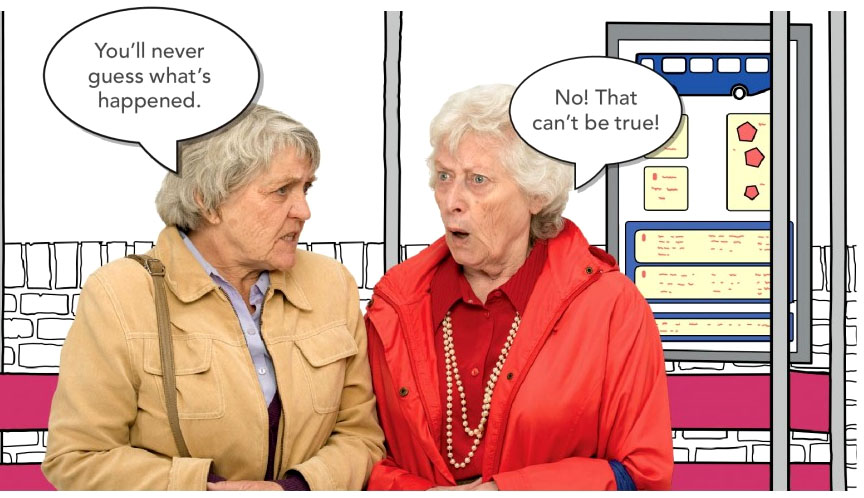 1   Rosemary thinks she heard them …

b having a party.

c having a conversation.

2   According to Rosemary, Emma said she was…

a seeing another man.

b looking for a new job.

c going to stay with her mother

a left the dog with a neighbor.

b left the children with her sister.

c left the children with her mother.

a tell her husband.

b tell her family.

Jack and Emma are Rosemary’s neighbors. They have broken up.

I   Hello, Rosemary. How are you this morning?

I   No! Jack and Emma from number thirty-six? That can’t be true.

I   saw them last week and they looked really happy.

R   No, it’s definitely true. I heard them shouting. They were having a terrible argument.

R   Last night. After he came home from work.

R   But I couldn’t help hearing. She was talking so loudly, and of course, the walls are very thin…

R   Well, she said that she was going to stay with her mum! She told him that she wouldn’t come back.

I   Ooh, how awful. What about the children?

R   She said she’d taken them to her sister’s. I suppose she’ll take them with her in the end. And anyway, then five minutes later I saw her leaving the house with a suitcase!

I   No! Why do you think she’s leaving him? Is he seeing another woman?

I   I must go and tell Mrs Jones at number fourteen. She’s always thought there was something…something strange about him.

C. Now listen to what Jack and Emma really said last night. Was Rosemary right about everything?

No, she wasn’t. She either misunderstood a lot of what she heard, or only heard part of the conversation. In fact, Emma isn’t leaving Jack; she’s going to look after her mother, who has had an accident.

E   She’s had an accident. She fell over in the street yesterday, and she’s broken her leg.

J   How awful! Poor thing. Shall I go and make you a cup of tea?

E   That’d be lovely. Thanks, darling.

J   How long do you think you’ll have to stay?

E   I won’t come back until the weekend, I don’t think.

E   Until the weekend. I’ll have to make sure she’s OK. I’ve taken the children to my sister’s for the night, and she’ll take them to school tomorrow morning. Can you pick them up after school?

J   Of course I can, darling. Now don’t worry about anything. We’ll be absolutely fine. Drink your tea, and I’ll go and get your suitcase.

E   Thanks, darling. The taxi’ll be here in five minutes.

Listen and answer the questions.

2   Caroline’s French teacher inspired her to ___.

a be a French teacher

c set up a language school in Australia

a make it quickly

b think about it for a long time

a a twin sister

a men gossip more than women

b women gossip more than men

M   I loved school actually. Um, I think I preferred senior school more than junior school, but yeah, um, lots of friends, lots of, sort of sporting activities and things, so yeah, I loved it.

I   What were your best and worst subjects?

M   My best subject was probably mathematics. Um, loved mathematics and found I was, sort of, very capable at it, so it was quite easy. Um, I think it’s one of those things that’s natural. But, um, worst subject, maybe Latin. Never very good at languages even though I use them every day now, but never very, I like languages now but I hated them at school.

I   Did you have a favourite or least favourite teacher at school?

C   Um, let me think about that. Yes, I, um, liked the French teacher. She was probably my favourite, favourite teacher because, um, she was French and she taught us to speak with a very good French accent.

I   Did she inspire you?

C   She did, and I’m still learning French and go, I live in Australia, um, and I go to France every year and I go to French language schools.

I   Do you have a problem making decisions? What about?

I = interviewer, A = Alison

I   Do you know any twins? Are they identical?

A   Yes, I’m a twin myself. I have a twin brother. And my sister has got twin boys. They’re aged 16 and they’re not identical. They don’t look very similar and they don’t have similar personalities either.

I   Who do you think gossips more, men or women? Why?