A. Listen and number the pictures 1-8. 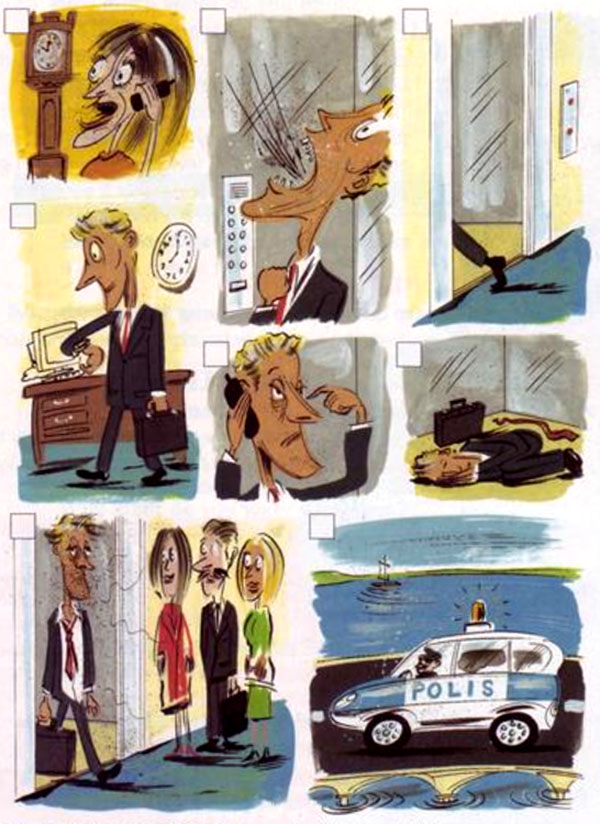 B. Listen again and answer these questions.

2   What was he planning to do that weekend?

4   What did he do when the lift stopped?

6   What did he do on Saturday and Sunday?

7   What did Silvia do when Sven didn’t come home?

1   Sven in the office looking at his watch.

3   Sven in the lift shouting.

5   Sven sleeping on the floor.

7   A police car looking for Sven

4   He pressed the button again shouted, and tried to phone his wife.

8   They looked for him but couldn’t find him.

N    Last Friday Sven, a company lawyer from Stockholm, was looking forward to a relaxing two days in the mountains. He and his wife had booked a skiing weekend in a luxury hotel. But the weekend didn’t work out exactly as they had planned.

Sven worked until late on Friday evening. His office was on the 12th floor. When he finished, at 8 o’clock, he locked his office and got into the lift … and he didn’t get out again until Monday morning!

Sv   I pressed the button for the ground floor and the lift started going down but then stopped. I pressed the button again but nothing happened. I pressed the alarm and shouted but nobody heard me. Most people had already gone home. I tried to phone my wife but my mobile didn’t work in the lift … I couldn’t do anything. I just sat on the floor and hoped maybe somebody would realize what has happened. But on Saturday and Sunday I knew nobody would be there. I slept most of the time to forget how hungry I was.

N    Meanwhile Sven’s wife, Silvia, was waiting for her husband to come home.

Si   I was very worried when he didn’t come home on Friday evening and I couldn’t understand why his mobile wasn’t going. I phoned the police and they looked for him but they couldn’t find him anywhere. I thought maybe he was with another woman.

N    So Sven was in the lift the whole weekend from Friday evening until Monday morning. At eight o’clock, when the office workers arrived, they phoned the emergency number and somebody came and repaired the lift.

Sv   I was very happy to get out. I hadn’t eaten since Friday afternoon and I was very hungry. It’s lucky that I am not claustrophobic because the lift was very small. The first thing I did was to phone my wife to say that I was OK.

N    Sven will soon be the fittest man in his office – from now on he’s going to take the stairs every day – even though it’s 12 floors.