A. Listen to text A. Answer the questions.

1   Why is it surprising that the museum is still very popular?

2   What do people want to do with the models?

3   How long does it take to make a model? How much does it cost?

B. Listen to text B about Madame Tussaud. Answer the questions.

2   Who was Philippe Curtius? What could he do?

4   Why was Marie frightened?

C. Listen. Match the questions and answers about text B.

D. Listen to the text C and complete it with the past form of the verbs in the box.

C   The move to England

E. Listen and complete the questions about text C. Ask and answer them with your partner.

1   Because we live in a technologically advanced world, yet wax models are still interesting for people.

2   They want to touch them and stand next to them.

2   He was a doctor and he could make brilliant wax models.

4   Because it was the French Revolution and people were being guillotined.

A   The museum today

Madame Tussauds waxworks museum is one of London’s most popular tourist attractions. You often see long queues of people waiting to visit their favourite lifelike stars, from Star Wars’ characters and the US President, to Prince William and Kate. It is amazing that in our technologically advanced world, people still want to touch and stand next to models made of wax.

It takes four months to make a model and costs about £150,000. There are Madame Tussauds museums all over the world, from Hollywood to Beijing.

So, where and when was the museum born? And who was Madame Tussaud?

B   Who was Madame Tussaud?

Marie Tussaud was born in 1761 in Strasburg. Her father, a soldier, died before she was born. When Marie was still very young, her mother moved to Switzerland, where she worked as a housekeeper for a doctor called Philippe Curtius. Marie and her mother lived with the doctor. He could make brilliant wax models. Marie loved these and wanted to learn how to make them. In 1766, Curtius moved to Paris. A year later, Marie and her mother joined him. Marie showed real talent for wax modelling and during the 1780s she worked on them with Curtius. It was the time of the French Revolution, and a frightened Marie started making death masks for people who were guillotined, including King Louis XVI and Queen Marie Antoinette.

B   Before she was born.

B   No, they didn’t. They moved to Switzerland.

B   She worked as a housekeeper.

B   How to make wax models.

B   Yes, she did. She loved making them.

B   During the French Revolution.

C   The move to England

Philippe Curtius died in 1794 and Marie inherited his waxworks. One year later, she married François Tussaud and two sons were born, but the marriage was not successful. In 1802, Marie moved to England with the waxworks and her son, Joseph. François stayed in France with the other son. Marie couldn’t speak a word of English, but she worked hard, and she started touring the country with her models. She visited over 70 towns in 33 years! The English were fascinated by the wax masks of dead French aristocrats.

A. Listen to Liam talking to his dad. Answer the questions.

1   Which events does Liam know about?

2   Which does his dad remember?

1   He knows about 9/11 and George Bush becoming president.

D   Yeah, it’s really interesting, isn’t it? Did you know any of the events on it?

D   Yeah – you were born just two weeks after that – on September 25th.

L   Yeah, exactly two weeks after. And, of course, I knew that Bush was the US president at that time, but I didn’t know Putin was the Russian prime minister. What do you remember of 2001?

D   Well, of course the best bit was when you came into the world.

L   That goes without saying, but what about the rest?

D   Let’s see the card – oh, I remember the foot and mouth crisis – that was terrible, the poor farmers. It went on and on – your mum and I couldn’t go walking in the countryside and I couldn’t play golf, the club was closed, and you know how I love my golf.

L   I do – so do you remember Tiger Woods being ‘Player of the Year’?

D   Oh yes, Tiger Woods, I remember that. And I remember buying my first iPod – that was great – all my favourite songs in one place. You know I’m a big Beatles fan . . .

L   . . . so you obviously remember when George Harrison died.

L   Yeah, I know about that. What about Harry Potter? Did you know that the first film came out in 2001?

D   No, I had no idea when it came out. I saw the film years later with you.

L   Yeah – I loved all the Harry Potter books and the movies. Now, the last thing . . . the Tower of Pisa. Didn’t we have a holiday in Italy when I was very young?

D   Yeah, you were five, I think, but we weren’t near the Tower of Pisa – I know nothing about that – I don’t know anything about its history at all.

L   I’ll look it up on Wikipedia – I didn’t know that began the year I was born. Did you know, Dad?

A. Listen to the conversation. Are these sentences true (✓) or false (✗)? If false, correct them.

1   The businessman and the fisherman met in the evening.

2   It took the fisherman four hours to catch the tuna.

3   He stopped fishing because he had enough fish for his family.

4   The fisherman doesn’t have any free time activities.

5   The businessman went to Harvard University.

6   He gives the fisherman lots of advice.

7   The fisherman gave the businessman some fish.

8   He went to a bar with the businessman.

2   ✗ It took about two hours for the fisherman to catch the tuna.

4   ✗ He has lots of free time activities.

When a businessman met a fisherman

B   Good morning. What beautiful tuna! How long did it take to catch them?

B   Only two hours! Amazing! Why didn’t you fish for longer and catch more?

F   I didn’t want to fish for longer. With this I have enough fish for my family.

B   But what do you do with the rest of your day?

F   I have a long lunch, play with my children, watch football, and take a siesta with my wife. Sometimes in the evenings I walk to the village to see my friends, play the guitar, and sing some songs.

B   Really? That’s all you do? Look, I am a very successful businessman. I went to Harvard University and I studied business. I can help you. Fish for four hours every day and sell the extra fish you catch.

B   . . . and you can export the fish and leave this village and move to Mexico City, or LA, or New York, and start a fishing business.

B   Why, that’s the best part. You can sell your business and become very rich, a millionaire.

F   A millionaire? Really? But what do I do with all the money?

B   Well, let me think. Er – I know, you can stop work and – er move to a lovely, old fishing village where you can have long lunches, play with your grandchildren, watch football, take a siesta with your wife, and walk to the village in the evenings where you can play the guitar and sing with your friends all you want.

Fisherman’s children:   Papa, Papa, did you catch many fish?

F   I caught enough for us today and tomorrow and also some for this gentleman. Please, señor, have some of my beautiful fish. Goodbye, señor. Come on children, let’s go home to Mama.

A. Listen and match the feelings and reasons with the photos. 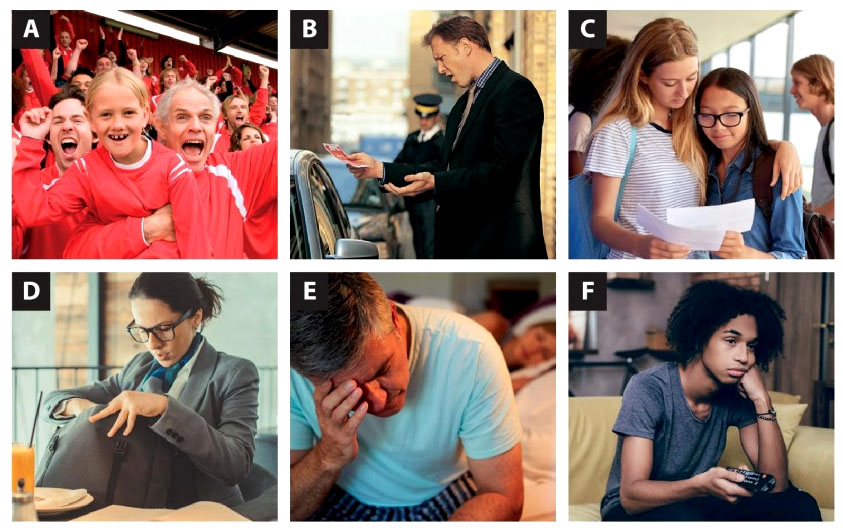 B. Listen and complete the conversations with -ed and -ing adjectives.

C   But you worked really hard.

F   Did they lose again?

B   You mean ‘when was it’. It was last Friday, on her birthday.

I’m bored because I have nothing to do and nowhere to go.

I’m excited because my football team won the cup.

I’m disappointed because I didn’t do well in the test.

I’m worried because I can’t find my passport.

I’m annoyed because I got another parking ticket.

It was really exciting!

A   What?! It wasn’t boring at all. It was really exciting and very funny.

C   But you worked really hard.

D   I know, I studied until two in the morning, but then I was so tired today I couldn’t read the questions.

3   E   I’m so disappointed. I really wanted my team to win this week.

F   Did they lose again?

B   You mean ‘when was it’. It was last Friday, on her birthday.

A   Oh no! Was she annoyed that I forgot?

B   No, she was just disappointed that you didn’t come to her party.

A. Listen and practise saying these dates.

B. Listen and write the dates you hear.

1   The first of April. April the first.

2   The second of March. March the second.

6   The twenty-ninth of February, nineteen seventy-six.

8   The third of October, nineteen ninety-nine.

9   May the thirty-first, two thousand and four.

2   The thirtieth of January.

5   The eighteenth of February, twenty twenty.

6   The sixth of August, nineteen sixty.

A. Listen. Join the lines in A and C with a linking word from B to tell his story.

Ben Way is 37 years old and he runs a company called ‘Rainmakers’. Ben’s a computer millionaire. However, he wasn’t always so successful. As a child he was dyslexic, so he didn’t do well at school. He didn’t read or write until he was nine and his father gave him a computer. He wrote his first software program when he was 11. He didn’t go to university because at 15 he started his own company. He first became a millionaire when he was just 17. He continued to be very successful until he was 21. He won a business award in 2000, but then in 2001 he lost it all. One year later he started ‘Rainmakers’, and now he’s a millionaire again.