English Grammar Exercises for B1 B2 – Past simple and past continuous

A. Write the past simple forms of these verbs.

B. Complete the sentences using the verbs from the box in the past continuous.

b   I was making dinner.

b   while it was falling on the floor.

3   After the teacher finished,

a   the students asked some questions.

b   the students were asking some questions.

a   during two years.

6   Clare was working in Oxford

a   as Mike studied at night school.

b   while Mike was studying at night school.

a   when everything was ready.

b   while everything was ready.

8   Was Susan wearing the same dress

b   when she was coming in?

D. This accident happened yesterday. Write what the people were doing at the time of the accident. 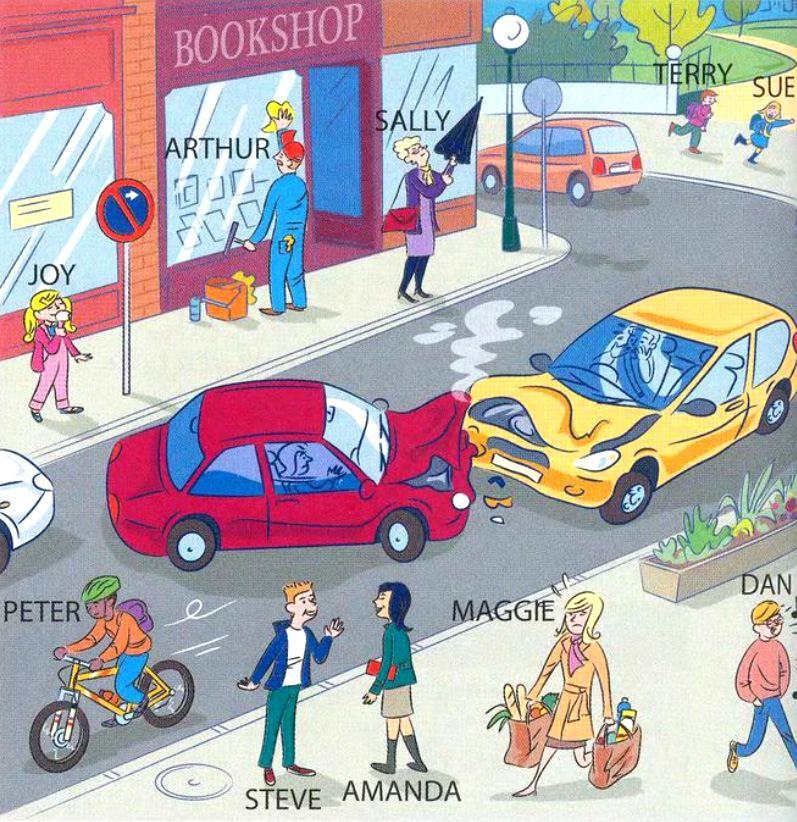 When the accident happened …

2   Peter was riding his bike.

3   Maggie was carrying some bags.

4   Terry and Sue were running.

6   Steve and Amanda were talking.

7   Arthur was cleaning the windows.

8   Sally was opening her umbrella.

E. Someone stole a picture from the museum last night. Read the detective’s notebook with information from three museum workers, then use the notes to write sentences. Every sentence should have one verb in the past simple and one in the past continuous.

remember his car keys / walk to his car

come back / see a woman with a picture

shout / the woman run away

look for some matches / lights come on

notice glass on the floor / look around

Sam Smith: sit at his desk / the phone ring

he pick up the phone / a strange woman come in

he speak / the woman go out

1   Tom was leaving the museum when he heard a noise.

2   He remembered his car keys while he was walking to his car.

3   As he was coming back, he saw a woman with a picture.

4   He shouted as the woman was running away.

5   Martha was cleaning the room when the lights went out.

6   She was looking for some matches when the lights came on.

7   She noticed glass on the floor as she was looking around.

8   Sam was sitting at his desk when the phone rang.

9   As he was picking up the phone, a strange woman came in.

10   While he was speaking, the woman went out.

Dick Whittington (1358-1423) was a famous mayor of London. The story says that Dick was a poor boy who 1…… to London to become rich. Dick 2…… his cat with him for company. Life was very hard in London. Dick worked as a servant 3…… some months but he got very little money and all he had was his cat. Finally, Dick decided to give his cat to a merchant and leave London. As he 4…… down the street, he 5…… a voice in his head. The voice said, ‘Come back, Dick, you will be Mayor of London three times!’ Dick came back. At the same time, the merchant and his men 6…… by ship to another country. It was a good ship but there was a big problem: rats! Rats 7…… everywhere on the ship and no one 8…… them. Luckily, Dick’s cat was very good at catching rats. The merchant was very happy with the cat and gave Dick a nice present when he 9…… home.

Dick now had some money and he started his own business. He also married a rich woman. Dick 10…… mayor of London three times and 11…… he died he left a lot of money. The story does not say what 12…… to his cat.

G. Complete the sentences to make them true for you.

1   When I got home yesterday, ……my sister was playing a computer game…… .