A. Match the sentence beginnings to the correct endings.

1   We had become friends

2   I had been waiting for an hour

3   They had been enjoying the picnic

4   I was bored with piano classes; I had been going

6   My best friend had already been at the school.

a   for as long as I could remember.

c   by the time the bus finally arrived.

e   when it started to rain.

B. What do these sentences mean? Tick a or b.

a   We sat down, then the film started.

2   When I arrived, everyone had left.

a   Everyone left, then I arrived.

b   I arrived, then everyone left.

a   I got the letter, then I forgave him.

b   I forgave him, then I got the letter.

4   We had just been talking about my cousin when she phoned us.

a   My cousin phoned and then we talked about her.

b   We talked about my cousin and then she phoned us.

a   She made a cake, then she went to her friend’s house.

b   She went to her friend’s house, then she made a cake.

6   When they had given me the medicine, I felt ill.

a   I felt ill, then they gave me the medicine.

b   They gave me the medicine, then I felt ill.

7   When I started school, I had learnt to read.

a   I started school, then I learnt to read.

b   I learnt to read, then I started school.

8   She’d taken the wrong turning, so she got lost.

a   She took the wrong turning, then she got lost.

b   She got lost, then she took the wrong turning.

C. Read the story and number the pictures in order 1-8.

One Monday evening in September, Grant put up his tent on a campsite on the edge of a mountain lake. The next morning Grant started a 15-mile walk through the mountains. A ranger had driven him to the start of the walk.

That evening a snowstorm started after he had put up his tent for the night. In the morning there was snow on the ground, but it was sunny and clear, so Grant continued his walk. Grant could not see the path very well and he slipped and fell down some steep rocks. He landed on a flat rock, but he could not move. He had lost his glasses and broken his arm.

On Saturday morning Grant’s friend, Ed, waited for him at the end of the trail. When he did not arrive, Ed phoned the rescue team. But Grant was lucky, a helicopter had already found him. 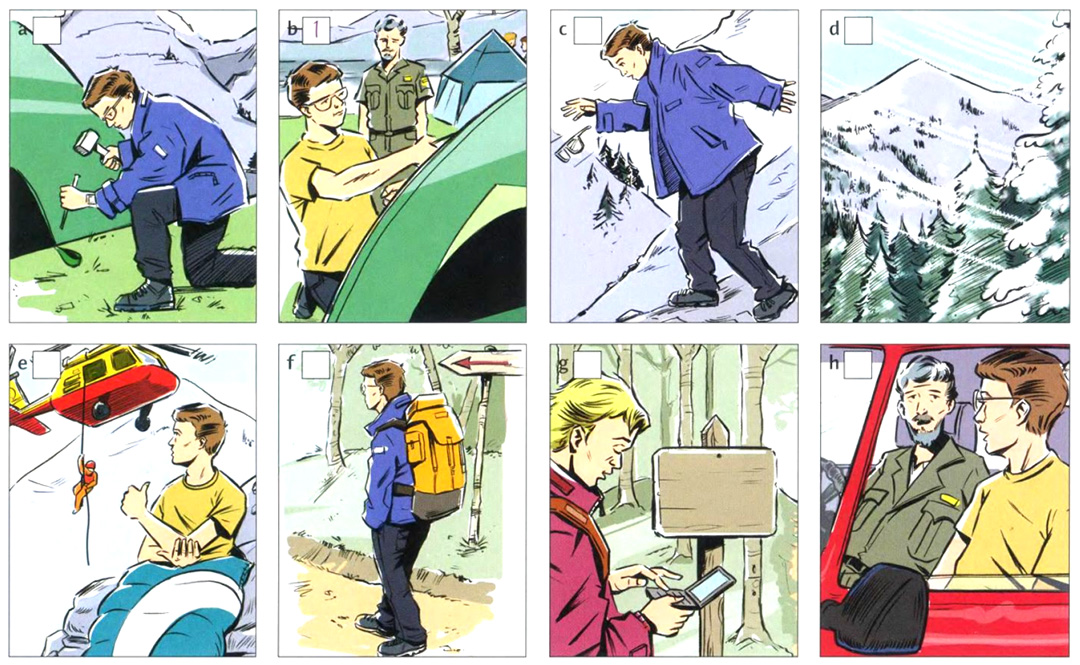 1    She was surprised to see him at work so early. She had told / had been telling him not to arrive before 9.00.

2    I couldn’t believe it when I saw the exam question. It was just what had been hoping / had hoped for.

4   He wanted to see the dentist, but she had been going / had gone on holiday.

5   It was great to hear from her. I had been waiting / had waited for her call.

6   She fell over and hit her head. She didn’t know how she had been doing / had done it.

7   The children were very dirty. They had been playing / had played in the woods.

8    I hadn’t been hearing / hadn’t heard of Louis de Bernières before I read Captain Corelli’s Mandolin.

E. Complete the sentences using the words in brackets. Use one verb in the past simple and the other in the past perfect simple or continuous.

2   had already made; ended

6   came; had been watching / had watched

F. Complete the text using the verbs in brackets in either the past simple, past perfect simple or past perfect continuous.

G. Complete the sentences with your own ideas. Use the past perfect simple or continuous.

2   When Jack ………… the next morning, the bean plant had grown in the night